Jousting in Chronicles of Elyria

As we mentioned in the State of Elyria, we're taking a different approach to how we document and share our progress with you. Based off of what we teased in the State of Elyria, some astute community members made assumptions on what we'd be working on next and what we'd be showing off at PAX West 2017. And those players were absolutely right! As we inch closer to PAX West, we wanted to use this opportunity to test out the format of our new quest journals, and reveal a small bit of the progress we've made on our in-development jousting mechanics for Chronicles of Elyria.

Normally we'd do a single quest introduction at a time, however as we're focused almost entirely as a team on our PAX West 2017 Experience, we're introducing three parties all working together to complete this grand adventure. As we move forward with our new party introductions, we wanted to attempt a system where we liberally extend our party analog to what you'd normally see on a quest write-up in most MMORPG's. So expect to see the following information in our party introductions:

While we'd normally do one of these write-ups at the very beginning of a quest, we've already started our parties and production is in full swing. This means we've already got some early concept work (and prototyping) in place - some of which we can share with you today, and some of which you'll have to wait for our mid-production update.

Speaking of which, Vye will provide a production update along the way as our parties make progress on their journeys. You can expect to see more production media then. With no further delay, meet the current Soulbound Studios adventuring parties, learn a bit about the new jousting mechanics, and see what we'll be showing off at PAX West this year!

We start off with the Knights of Hastilude, which consists of adventurers from the design, engineering, and animation guilds. On the design side of things, Creative Director Caspian, UI/UX Designer Death, and World Builder Souzou are focusing on building a fun and engaging experience. To ensure the game-play features we build do the things we need from an engineering perspective, Engineer Sekmu, Engineer TripNull, and Lead Programmer Cynax join the party. Wrapping things up in this party: Lead Animator Mudokon and Technical Animator Strider will contribute their rigging and animation know-how to help the party achieve their goals.

The designers of the Knights are responsible for defining the rules around our jousting system, including targeting and mounted movement mechanics (hyah!). Additionally, the Knights need to build the user interface, along with the collision detection of jousting hit boxes, state changes for scoring and the act of jousting itself, the core animations of the feature, and the jousting and hit-reaction animations.

How will jousting work in Chronicles of Elyria you ask? Well, there are three implied phases to jousting: approach, aiming, and impact. During the approach phase, players will have the option to enter combat mode or urge their mount on to increase its speed. During the aiming phase, a player can make minor adjustments to the mount's direction and enter the aiming mode to aim where their lance will strike. Players can also clutch their lance to increase its potential to unseat their opponent. Once clutched, players lose the ability to control the majority of their character's movement before impact happens (roughly 1-2 seconds), giving them a brief moment to let the tension build before the lances shatter.

Note that the three phases are logical, and not actual phases. It'll feel like one, seamless experience as players begin their run down the tilt-yard, lower their lance, aim, and strike. Also note that these mechanics are the same in a structured jousting experience as they are on the battlefield, and careful attention has been paid to make sure the mechanics work equally well in both cases.

Below is the flowchart Death created to not only illustrate the intended design of the jousting experience, but to help guide the production process as well: 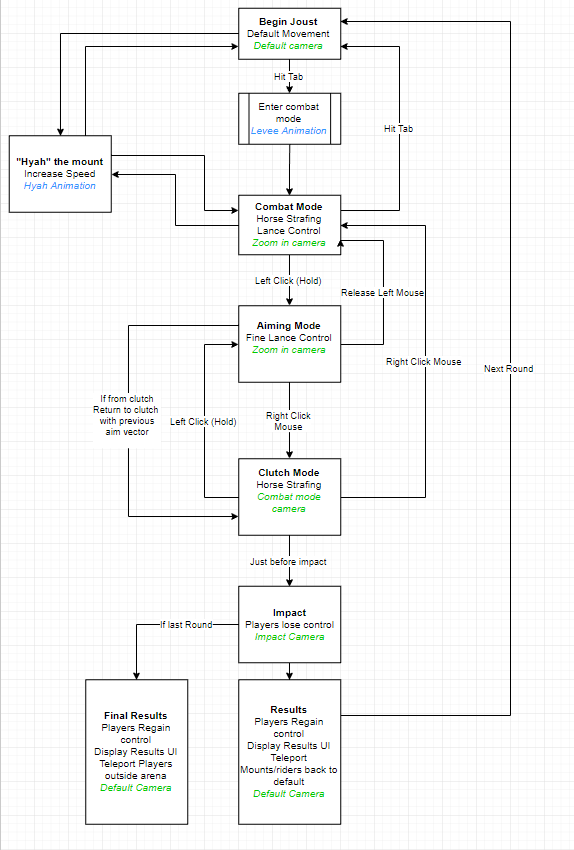 We're still fine tuning this experience, so some things are subject to change. But we can't wait for you to jump into the action and joust alongside other PAX-goers!

Next up, we have The Tournament Armory - the group of adventurers in charge of creating the equipment for the knights and steeds - including armor and lance. Technical Art Lead Wiz, Character Artist Irreverent, Art Director Heat, Animator Racronos, and Character Artist Vanimus Prime have assembled to take on these tasks.

The Armory has three main quests we're tracking: they need to create the character and horse armors, the equipment (such as poles and lances), and how the lance breaks and splinters.

We're still defining which armor sets we'll throw on the digital caravan we're bringing to PAX. Until then, here's a look at some of the armor concepts crafted by Heat.

Lastly, we have an adventuring party that consists of Environment and FX guild members. With Technical Art Lead Wiz, Art Director Heat, Animator Racronos, Environment Artist Raevantiel, Sound Engineer Vandermast, and Programmer Michael in this content creation stable, they are tasked with no easy quests.

Namely, they are responsible for creating a jousting map with practice and competitive tiltyards, the lighting of the map, particles for mounted movement and sparks for hit reactions, sound effects for movement and combat, and a background track for the demo experience.

While the Vanguards have already made great progress on the arena, here's a concept to hold you over until Vye's production update.

Because of the studio's focus on this specific feature for PAX, we've included each party's quest goals here. Generally, these future quest blogs will look at what an individual party is working on. But it's all hands on deck, as the quests need to be completed in time to thoroughly test and polish the experience before it's on the show floor at PAX West 2017.

We know that you probably have a few questions about the jousting experience, so we'll be holding a brief, live Twitch Q&A on Thursday, August 10 at 1PM PDT / 4PM EDT / 8PM GMT / 8PM UTC. Use this post to ask your questions!

But what about community involvement? If you're going to be at PAX West in Seattle this year, stop by our booth and give us feedback. This is the first opportunity you'll have to get your hands on it, test it out, get a feel for it, and let us know how we're doing. And if you're good enough, you may even qualify for an hourly prize or the ability to compete in our daily tournament!