A world being built...

Welcome to the Chronicles of Elyria update for the week of August 8th, 2016! This week's update will be on the lighter side, as most of the work the team is doing right now is still in-progress. That said, the stuff the design team has been working on does tie in nicely to a render/screenshot I've been holding onto. So, I'll use this week's update to share that and talk about it a bit.

Also, last week's update, Down the rabbit hole..., was one of the more contentious updates, with people coming down on either side of a debate regarding whether they liked the new changes or not. This lead to an (as of now) 11-page forum topic about the subject.

Ultimately, most of the peoples' concerns were based on some false assumptions, and once those were clarified, most people seemed to be satisfied. If you're like others and had some concerns about last week's update, you might check out my post in the thread I don't like this change... and see if it doesn't calm your nerves.

Ok, with that out of the way, let's get to the roll call!

There's no question. Production is focused first and foremost on the hiring process right now. We're still seeing great resumes/CVs come through LinkedIn and Gamasutra, and I'm currently setting up phone calls and live interviews with over 50 people in the next couple weeks.

Aside from that, the Web Team has cleared out most of the main bugs that would prevent us from shipping a new private message system and online store to you. No date available yet, but as soon as we've got a date, we'll let you know.

We're using a few different tools to create the assets, and rather than focus on pumping out assets straight away, we're spending the time making sure we have a sustainable workflow using those tools.

Early on in the project, we decided we really wanted a feeling of being planted in the world. That is, we wanted it to feel like you were really there. As a result, we had a very robust animation system that blended between even seemingly minute variations in animations to account for all the transitions we make in our world.

For example, when we're running and come to a stop, we don't do it immediately. We generally slow down to a bit of a trot, then a walk - even for just a step, and then come to a complete stop. Our early animation state machine worked much the same way. It looked and felt like you were really there.

Unfortunately, it didn't feel responsive. You'd be running, let go of the forward button, and then take several steps before slowing down enough to come to a complete stop. As a result, we've been progressively making trade-offs between realism and responsiveness, in an effort to get the right feel.

Fortunately, it feels like we've finally found the right mix. When walking, the system is extremely responsive, even allowing you to tightrope walk if you wanted to. This is very important for some of the platformer-like elements we're planning to integrate into the game.

When running, your character is allowed to take one step when attempting to come to a stop. That's enough that the animation seems natural, but not so much you can't anticipate where it will stop.

When sprinting, your character takes about three steps to come to a stop. This is necessary so it doesn't look like your character is throwing all their weight forward, while still making it look and feel like a real, living world, rather than an avatar that is just changing animations on command.

Ultimately, we think you guys will like where we're at.

The environment team continues to add detail and richness to Titan's Steppe. For those that are just tuning in, Titan's Steppe is an area that exists on all servers of the game and is the setting for the Prologue: The Awakening. Within Titan's Steppe are the town of New Haven and the village of Silver Run.

What do you think? Does showing off Silver Run and New Haven seem like a good way for us to show off the new walk, run, sprint system? Yeah. We think so too. Stay tuned for video footage. No release date yet, but as usual, once the video is ready to release, we'll let you know.

Speaking of Titan's Steppe. This is the perfect transition into what the design team has been working on this week. When we initially designed the world, we identified 18 biomes which ranged in humidity, temperature (based on latitude), and elevation.

Those have worked great from a conceptual standpoint, but now we're going back over the 18 biomes and deciding whether there's enough uniqueness between them to justify all 18, or whether we should collapse some down and reduce the number of biomes.

At the same time, each biome brings with it a natural set of adaptations. One of our designers has been doing significant research on the adaptations of plants and animals within the different biomes of our world and translating those over into adaptations in Elyria. From this, we're coming up with some very interesting flora and fauna.

We'd love to show you all of those. However, they're still just in a conceptual state right now. To ensure a consistent food chain throughout Elyria, the designers are starting from the lowest level of the food chain - lichen, moss, fungi, etc... and are working their way up.

As we get further up, we'll develop new concept art which identifies those creatures unique to Elyria. We're pretty sure you're going to dig them.

To finish off this week's update I wanted to talk a bit more about how the world is built. I've talked about this on the forums before, but I don't believe it's made it into an update yet.

The different servers/worlds in Chronicles of Elyria are each procedurally generated, and each goes through a multi-step process during creation. First, we take the largest map size we want and break it up into tectonic plates. From there, we erode the plates, translating and rotating them and letting them collide with one another, forming convergent boundaries that form subduction zones, mountains, and volcanoes.

Once this is done, we have a basic outline of the continents and mountains. From there, we run height map generation algorithms on the continents in order to create a natural, realistic feeling terrain.

Next, we take large circles and overlay them on the map, each identifying major wind patterns which effect the pressure systems near and over the continents. When combined with the latitude/temperature, it allows us to create a humidity map, which is then used to determine the relative humidity in different regions.

From there, we take the topology of the map and the humidity, and we establish rivers, lakes, and rain shadows, as well as set the boundaries of the different watersheds / drainage divides.

Next, we take the locations of rivers and lakes, the distance from the subduction zones and mountains, and the elevation, and we use that to distribute soil types and to procedurally distribute metals and other natural resources across the map.

Now we have our biomes. The temperature is determined largely by latitude and elevation, and the humidity is set by the air pressure and the presence of rain shadows - areas to the east of large mountains where rain doesn't fall. From here, we can populate the biome with flora, fauna, and people.

With the knowledge of where trees, food, and water are, as well as the boundaries of the mountains, watersheds, rivers, etc. we can identify what the boundaries of the different domains will be. Kingdoms are generally divided by large topographic structures, such as mountains, large rivers, or biome changes. Duchies are almost always divided by biome changes. And finally, counties are generally separated by drainage divides, smaller rivers, or forests.

In the end, you get something like the following map. Please note, this map shows the biomes of the sample world we're working with. It also shows the borders of Kingdoms (in color) as well as Duchies (in black). 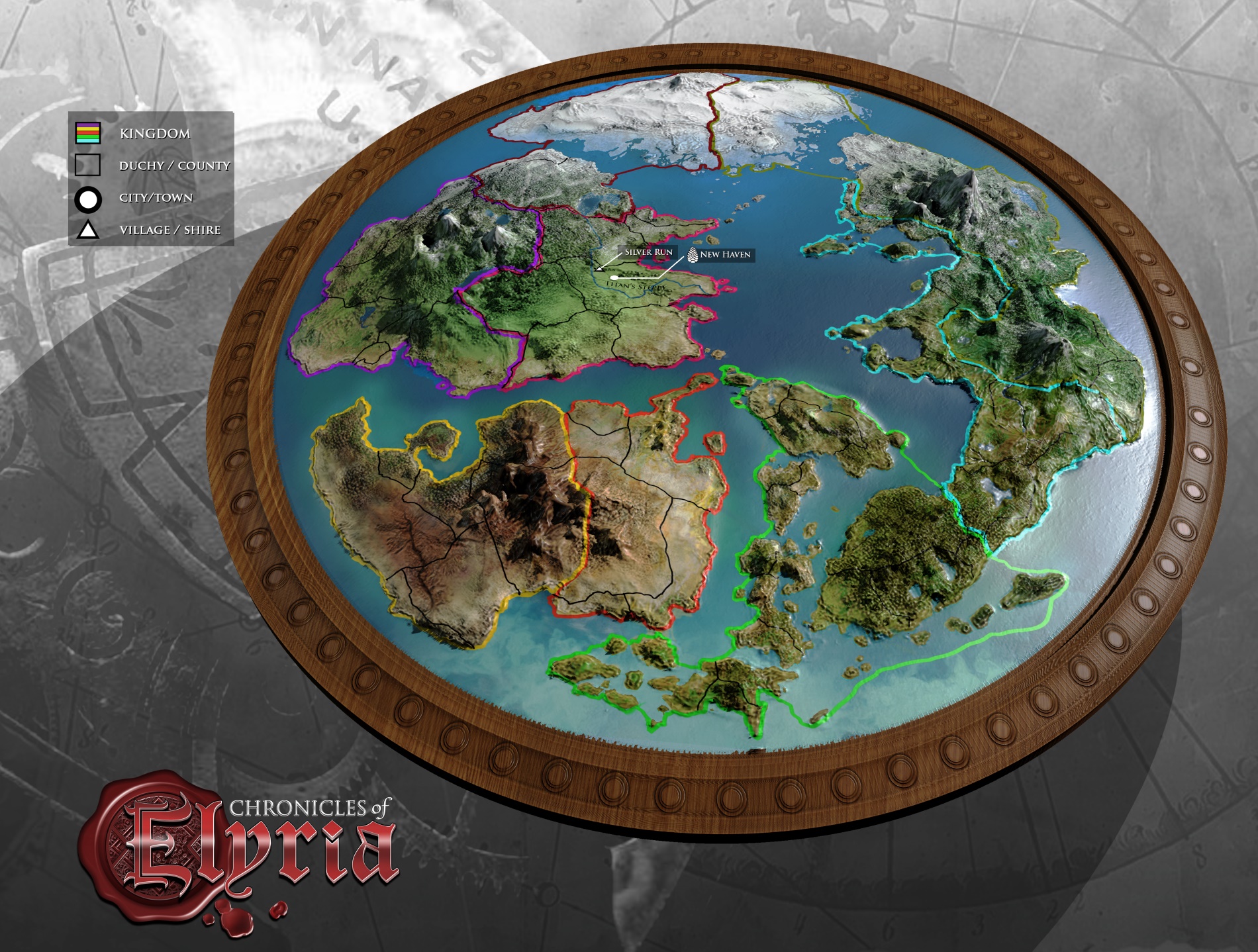 It should be noted that this isn't necessarily the complete world, and isn't the world at the beginning. This map shows the kingdom boundaries after expansion has occurred and travel overseas to neighboring continents.

Even still, it serves as a good example of the world you can expect to enter in Chronicles of Elyria.

And look...you can see where Titan's Steppe is on our test map.

The environments, biomes, and regions are all undergoing final design. Once we complete this step of the process, we'll be able to communicate a lot more about the world you'll be entering during exposition. With settlements placed near natural resources, animals breeding in the wild, and creatures that inhabit the less frequented areas of the world, Elyria should prove more than enough to explore.

Down the rabbit hole...