Home > News > Part of Something Noble and Purposeful
18 May

Part of Something Noble and Purposeful

It's already Week 3 of our celebration and our next promotion is all about togetherness! There are already a plethora of Settlements and Organizations actively recruiting on our forums but it's been entirely a system of promises. We're not doubting the veracity of anyone's word, but we're helping you all make good on your promises! 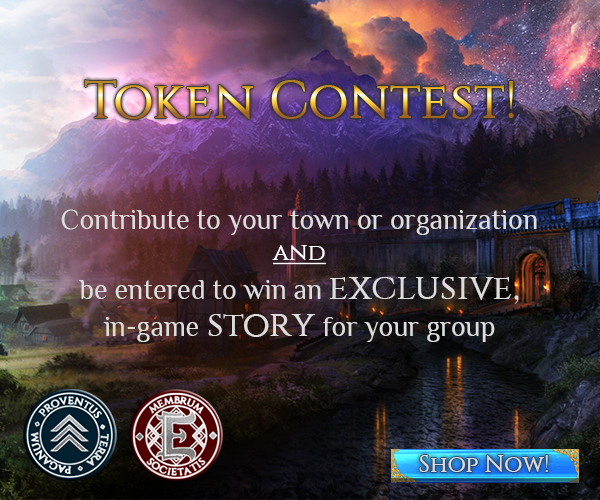 Tokens have been available in the online shop for a while but the descriptions were a bit vague and there's been no way to do anything with them...until now! This week we are creating the Token Contribution service that no one knew they were waiting for.

Villager and Guild tokens represent a player's commitment to a settlement or organization. By contributing a token to another player, you're investing in their organization in the same way you would when the game was live by contributing your time to the gathering of resources, the building of structures, or the execution of your duties and responsibilities. This allows your settlement and organization to begin to grow immediately, and will grant your player-community access to our website management tools as soon as they become available.

The prestige and notoriety of a player-community comes not from the wealth of an individual, but from the strength and size of its numbers. As a result, we've put a cap on the total number of tokens of each type a single individual can purchase and contribute. Originally we had limited the number of tokens to one per type, however a valid point had been made that players A) may want to be part of more than one organization or settlement and B) are not all equal in their contributions to an organization - even in game - and some may want to contribute more to their player-communities than others.

For this reason, we've increased the number of tokens per individual to three (3). You can send those all to a single settlement or organization, or you can divide them up and send them to multiple - the choice is yours.

To purchase a villager or guild token head over to the digital merchandise section of our online store and purchase up to three of these tokens. Note, if you've already purchased one, you'll only be able to buy two more. 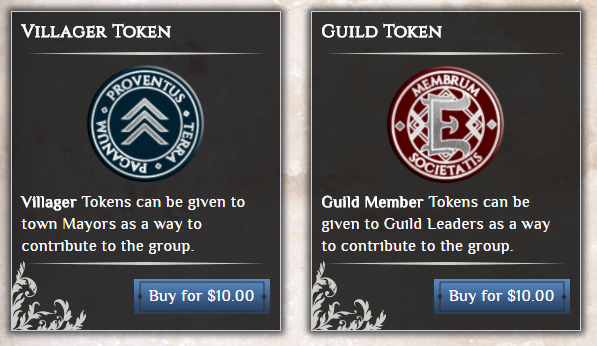 Once you've purchased a token you can see the ones in your inventory by going to your account profile and clicking on Tokens on the left. This will show you the following page. 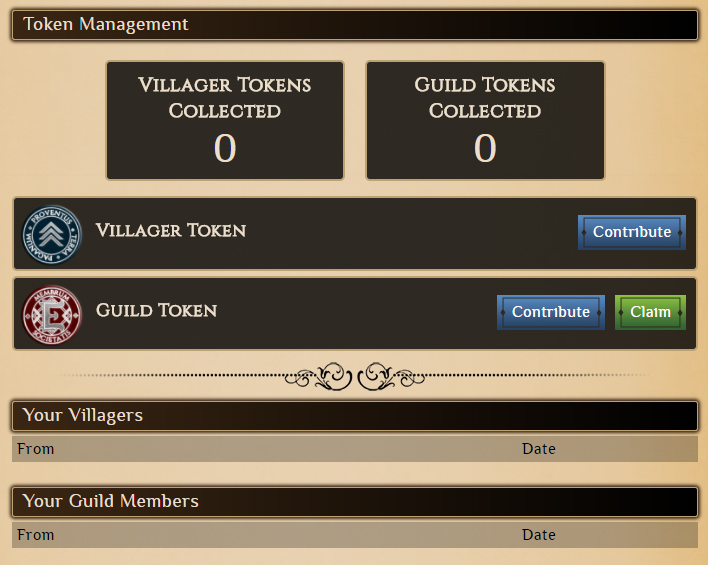 On this page you can see a couple different sections. At the top you will see the number of tokens of each type you've received. This is a simple counter and will go up automatically as people contribute tokens to you. Below that you'll see the collection of tokens you've purchased. This section could be empty or have up to six tokens listed.

On this screen enter the user account (forum) name of the person you want to send the token to. Make certain you have the user name correct by clicking verify. Once you hit send you'll be given a confirmation dialog. Make certain you're sending the token to the person you're wanting to. There's no undo action, and no refunds on tokens if you send it to someone you'd didn't intend to.

And that's it! The more people who contribute tokens, the faster your settlement and organizations will grow. Here's what each Token does: 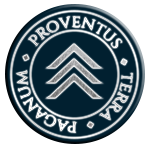 In order to celebrate our Kickstarter-versary this month, we are keeping track of all the Tokens contributed through the rest of May. Villager Tokens must be contributed to a player with a Settlement (Mayor title and above), but Organizations could be started by anyone. Each Token is ultimately an entry into a raffle with prizes as follows:

There will be a set of winners on each server, which we'll announce after Server Selection. So check with your groups and find out who to send those Tokens to - there is a limited amount of Tokens you can contribute and a limited time to contribute in order to be entered into this raffle! Don't miss out! Tokens will still provide their normal benefits during Exposition so, if you haven't decided which town or organization you want to be in yet, there's still plenty of time to search through the offerings and find your comrades.

The Hunt for Week Four-tober

Theories abound about what the surprise is in the fourth week of the celebration. You won't mind if I give you a hint, right? I wouldn't want to take the fun out of guessing... 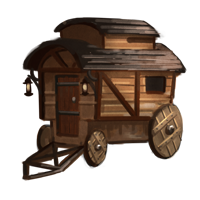 The sales on Pledge Packages and Exposition Points continue - 10% off through the entire month of May! Not to mention the limited-time EP Pack worth 3,000 EP for $200!

These deals won't last forever though; at the end of the month the prices will go back to normal.

Also, referrals will be giving you a bigger bonus if May is the month that your friends finally decide to back us and join you in Elyria. The typical reward is 50 Influence and $5 store credit but, during May, you'll enjoy a 100% increase: 100 Influence and $10 store credit! Store credit can be used on anything in the shop.

May is the anniversary of our Kickstarter and we're celebrating all month with special promotions! Check out the announcement post for full details about the different events going on this month.