Born: Near the village of Twin Streams

Ilyria (Lyr): This young girl is in her early teens, sporting a broad smile and grey eyes. A trace of a thin scar is evident on her left cheek. She is wearing white-dyed cloth shirt, black belt and high boots and has a short sword hung from her baldric.

Backstory: “Lyr” grew up near the village of Greanth, not too far from the capitol. She’s fairly educated and came from a noble family, although she’s had a taste for getting herself in over her head as a child.

Her Uncle Norhan told her stories of adventures and such, which got her “curious” about seeking fame and fortune.

When she was fifteen, she decided to explore the Blightwood Forest near her home, where she was grazed on her left cheek by a small bear. Since then she’s slowed down “a little” in her ways as part of the town militia, if there’s something exciting to do and she gets wind of it, she’ll definitely pitch in. Now finally of age, she’s a bit more respectful towards the wild.

She doesn’t like being called Ilyria, her given name – and is first to correct someone using it, except her Uncle. In her belt pouch, she carries a locket she found with a drawing of a rather handsome young boy and the word “Michael” in styled calligraphy. Perhaps she can find out who he is, who knows?

Resolute she hastens her tread to the house where her parents once lived before the war broke out. As a young woman now, and last heir of the Balmore dynasty she leaves a broken piece of wood behind of what once was a majestic entrance to the Balmore manor, to claim her heritage. 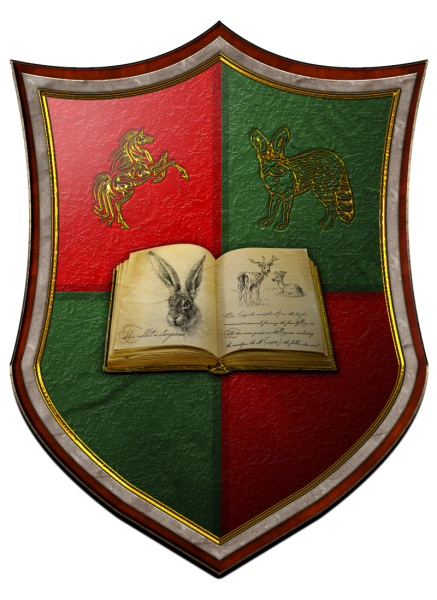 Where can you find us?

Elyria's incredible array of wildlife occupies an equally diverse variety of habitats, from the frozen tundra to the sizzling desert. When these habitats are threatened, so too are the plants and animals that call these places home. Balmore county needs dedicated wildlife protectors, to makes sure no plant or animal goes extinct ever. We may not change the whole world, but Balmore county is a great place to start spreading awareness of the heritage the old gods have left us with.

Why do we do this? 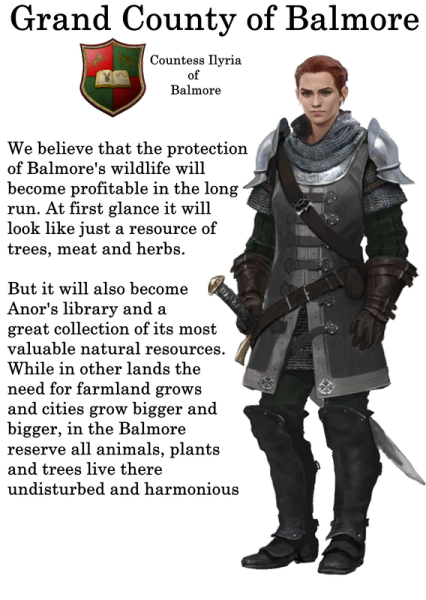 Later in the development of Elyria the people elsewhere will miss them and will be searching for places where they still find these animals. Hopefully they will have learned the animals, trees and plants are important for Elyria's climate.

Why do we think this is profitable?

The people who will come to us for help will be the craftsmen. They need the wood, hides and herbs for their ever expanding cities and industries but we will scrutinize them carefully and make sure that not even a daisy will be plucked without permission of the landowner. Nobles will come to us to hunt, and animals who saw their grazing grounds taken away may slowly coming to live in our lands. Of course that is a bad sign, but that is the reason why our lands need to be protected. Nothing will be taken from the land without explicit permission of again the landowner. Everybody who needs natural resources is our customer. Especially healers, carpenters, tamers, and many more. A connection with nature makes us healthier and happier people, something that few of us nature lovers would argue with. 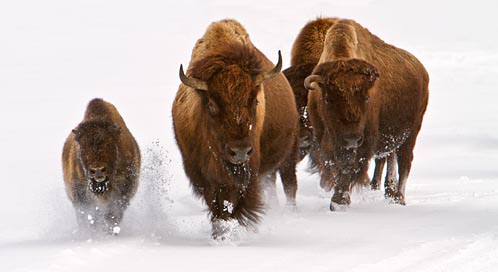 Preventing species from going extinct in the face of so many threats isn't easy. It means that everyone, from common citizens, to Kingdom's corporations, have to commit to the same set of actions when a species is in danger of disappearing forever. The greatest tools we have in the fight to prevent extinction are the local, county, and kingdom laws that protect imperiled species.

Our planet's incredible array of wildlife occupies an equally diverse variety of habitats, from the frozen tundra to the sizzling desert. When these habitats are threatened, so too are the plants and animals that call these places home. Today, we live in an age where wildlife habitat is experiencing more pressure from humans than ever before.

Who do we need?

For decades, Game Wardens have played a leading role in helping shape smart policies to conserve wildlife and habitats on public lands and waters. A large portion of our habitat work focuses on our national forests, national monuments, and other public lands and waters, as these areas represent some of the last, best places for wildlife to thrive. But we also work extensively on private lands, working in partnership with private landowners and state and tribal agencies to encourage people to protect and restore key habitats on private, tribal and county lands.

Game wardens serve in a major law enforcement capacity and have full law enforcement powers to enforce laws and arrest violators within Balmore's borders. For the most part candidates applying to be a game warden do not required prior work experience, although an affinity with nature is required. We need People who are willing to patrol the County and put their lives on the line to protect Demalion's natural heritage we call Balmore.

Function: 1: Game wardens must never be afraid to protect Balmore against poachers. Some affinity with the martial arts would be nice, though a game warden never engages hostilities alone. Always keep the upper hand, or retreat and ask for reinforcements.

2: Every game warden has to patrol a part of the county and make notes if necessary. 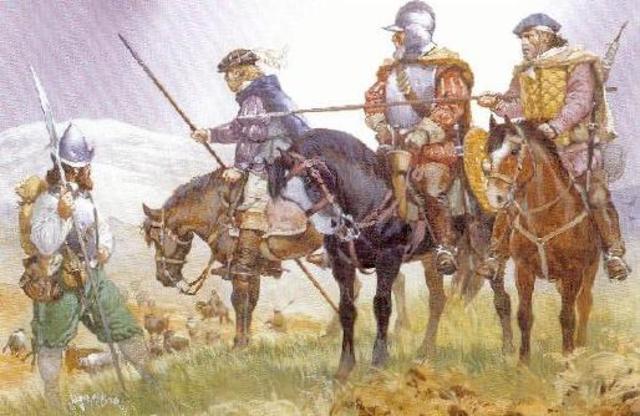 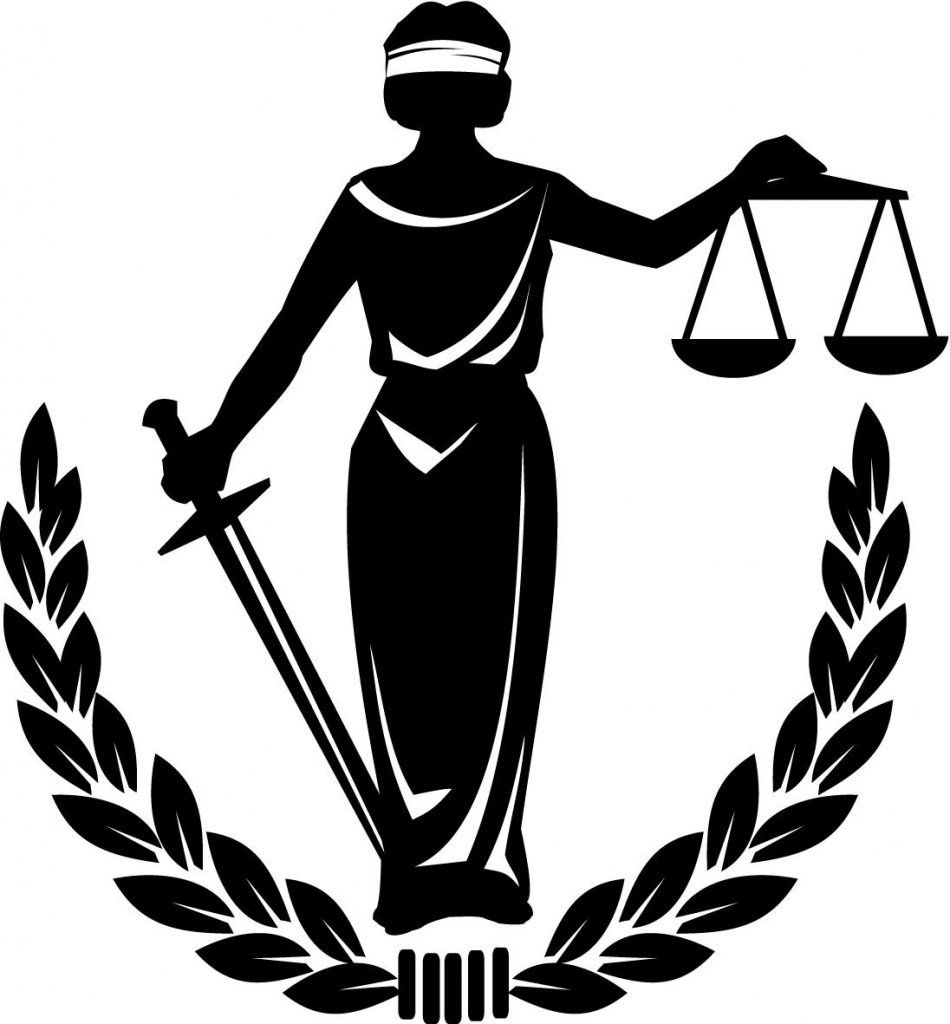 It's very nice to see a Ne'ran run domain putting aside nature preserves and protecting resources. Wish you the best of luck in your endeavors!