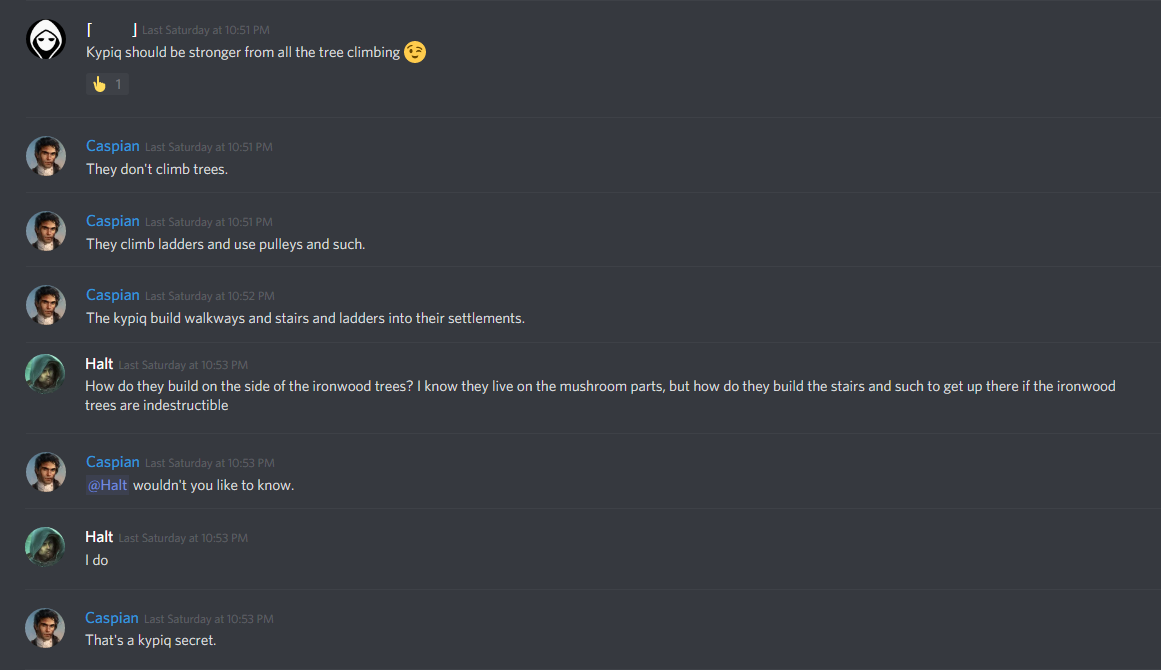 I'm hoping that Caspian simply misspoke as the representation of the Kypiq being "squirrel like", climbing trees and chattering in forest cant is a big appeal for me. It'd be pretty disappointing if their design has changed. Would it be possible to get some clarification on this from SBS? Not to mention how difficult it would be to try and build anything in the trees if you can't even climb them. Not impossible, just difficult mind you and I really liked the idea of squirrels scurrying around the treetops, raining down death on invaders.

Yeh this Is really important to me too. either they need to say they're changing the description or they need to sit down and explain the kypiq better to us. because from their tribe description I thought they were small and fast. additionally them tiring quickly never made sense to me. all the IRL worlds long distance running champions have been shorter and very skinny. meaning they use less energy to move and so can sustain it for longer.

I think the easy clarification part would be they Can climb trees, they just Don't have a need to for the same reason we don't climb the sides of our houses without stairs or ladders.

Solid clarification would be nice though.

@Curzman, the idea that they tire quickly is because they are essentially sprinters. They could not have evolved to have explosive bursts of energy up trees unless they were extremely muscle bound, or diminutive.

The former may have allowed for more of the muscle required for longer bouts of climbing (a much more arduous task than long distance running) but would have left them too heavy to live for prolonged periods in the canopy.

The latter, allows for fast twitch muscles to be developed, keeping them small and allowing them to scurry up the tree quickly so they can look back down and rain insults in an increasingly squirrel like demeanor. To help clarify a little on the kypiq and add onto what Labbe said.

They also have extremely low stamina, and have the lowest ground speed.

I get that the tribes aren't going to be balanced, and I actually think that's a good thing. I really dislike playing games where every class is so "balanced" that there is virtually no difference between the classes. "And when everyone's super, no one will be" -Syndrome.

Now I respect Caspian's opinion, but remain hopeful that being very agile can give a Kypiq a decent chance in a fight. Dodging blows and taking them out at the knees with quick tendon strikes may be a good tactic. However, if Caspian is in fact correct that a Kypiq doesn't stand a chance of victory in a melee encounter, isn't that even more reason to allow them to "scurry up a tree trunk"?

I get that the tribes aren't going to be balanced, and I actually think that's a good thing. I really dislike playing games where every class is so "balanced" that there is virtually no difference between the classes. "And when everyone's super, no one will be" -Syndrome.

Now I respect Caspian's opinion, but remain hopeful that being very agile can give a Kypiq a decent chance in a fight. Dodging blows and taking them out at the knees with quick tendon strikes may be a good tactic. However, if Caspian is in fact correct that a Kypiq doesn't stand a chance of victory in a melee encounter, isn't that even more reason to allow them to "scurry up a tree trunk"?

Understandable. However, I believe the key word in the above statement is expect. Remember that combat is likely (always open to change until it isn't) going to be almost entirely player skill. What this means is that while no Kypiq could expect to beat another tribe 1v1, that's from an entirely vanilla fight. I would fully expect an experienced and talented Kypiq PC to whoop up on many folks if they've spent time perfecting their fighting arts. Now, if they were to go up against an entirely balanced enemy (same skill, etc...) they would probably lose. But even then, if it's player skill, you might just pull it off because you were in the zone that day.

The Kypiq playerbase will be as different as the tribe.

1) Perhaps Kypiqs will have mastered an ability to direct tree branches to grow in beneficial ways, so that the scaffolding for their structures and aerial paths are actually tree branches, for the most part.

2) Kypiqs are probably very good at defending themselves in their native environment. I would expect them to completely control the "air" there, decimating all but the most well-armored invaders, and starving them with attacks on supply lines.

RE:The Kypiq. The earliest Kypiq were bigger than the modern ones. They were proto-nerans that sought refuge in the trees. They were bigger and taller than the Kypiq today, and likely climbed the trees. Over time, they have gotten smaller, weaker, and have come to rely on technology and their elevation into the trees as a natural form of defense.

Modern Kypiqs do not generally climb trees. That's more of a Janoa thing. They do use ladders, pulleys and other things to help them climb.

Well that's disappointing. I was very excited for the Kypiq as per their write up. Seems like such a waste to have nothing special about the Kypiq in a low fantasy setting. Most of the tribes have something slightly fantastical about them such as the Tarzan-like Janoan, or the slightly psychic Waerd. I understand that it's a development process but the Kypiq, to me, seems to be diverging from the concept quite a lot.

Maybe I have it wrong, but I think they seem to have gone through big changes. At first impression they seemed a nimble lightweight tribe who lived in treetop settlements (which I think many of us imagined like a traditional elven or ewok type of "village" with walkways etc) that climbed trees and scurried about enough to earn them a global nickname as "Squirrels." In fact initially people wondered if they could leap from branch to branch, or possibly develop a "flying squirrel" wing suit of sorts.

Now they seem to just be short people who live on mushroom tops that sprout randomly along the main trunk of the ironwood trees, with "bridges" built in between them. I'm glad they still have the forest cant, and I'm still looking forward to playing as a Kipiq, They have definitely lost some of their "shine" though. Disappointing that their fantastical aspect is just being short vegetarians, I'm already one of those IRL.

Though things are still in development, maybe Caspian will change his mind again and return to some of the original concepts.

Yeah unfortunate i agree, i chose Kypiq/Kypiq surname based on the original description. Im also one that loves PvP. Cant say how excited i am to see i have now essentially handicapped myself in PvP and cant change my surname etc. YAY!

Kypiq will use their superior gadgetry to overcome their PvP disadvantages. It is a mistake to think of PvP as only a gladiatorial competition. Much of it will be quite asymmetrical, because of the need to defend economic assets from banditry.

Either way we must invent tree climbing claws and spurs to aid us - so we'll definitely be able to climb if we want to, we just won't have to. >:D

That said I'm posting to follow the thread, I'd love an official response given that I was extremely confused at the differences in how I interpreted the info.