There are beasts to be tamed, ore to be mined, and hell to raise!

Zephyros is a 12x County with 48 total settlements and the seat of power for The Anemoi!

(Technically two 6x counties that will be merged after launch.)

We are recruiting additional mayors.

We pick based on IP order. This image denotes what our people would pick if no one else picked within our county. 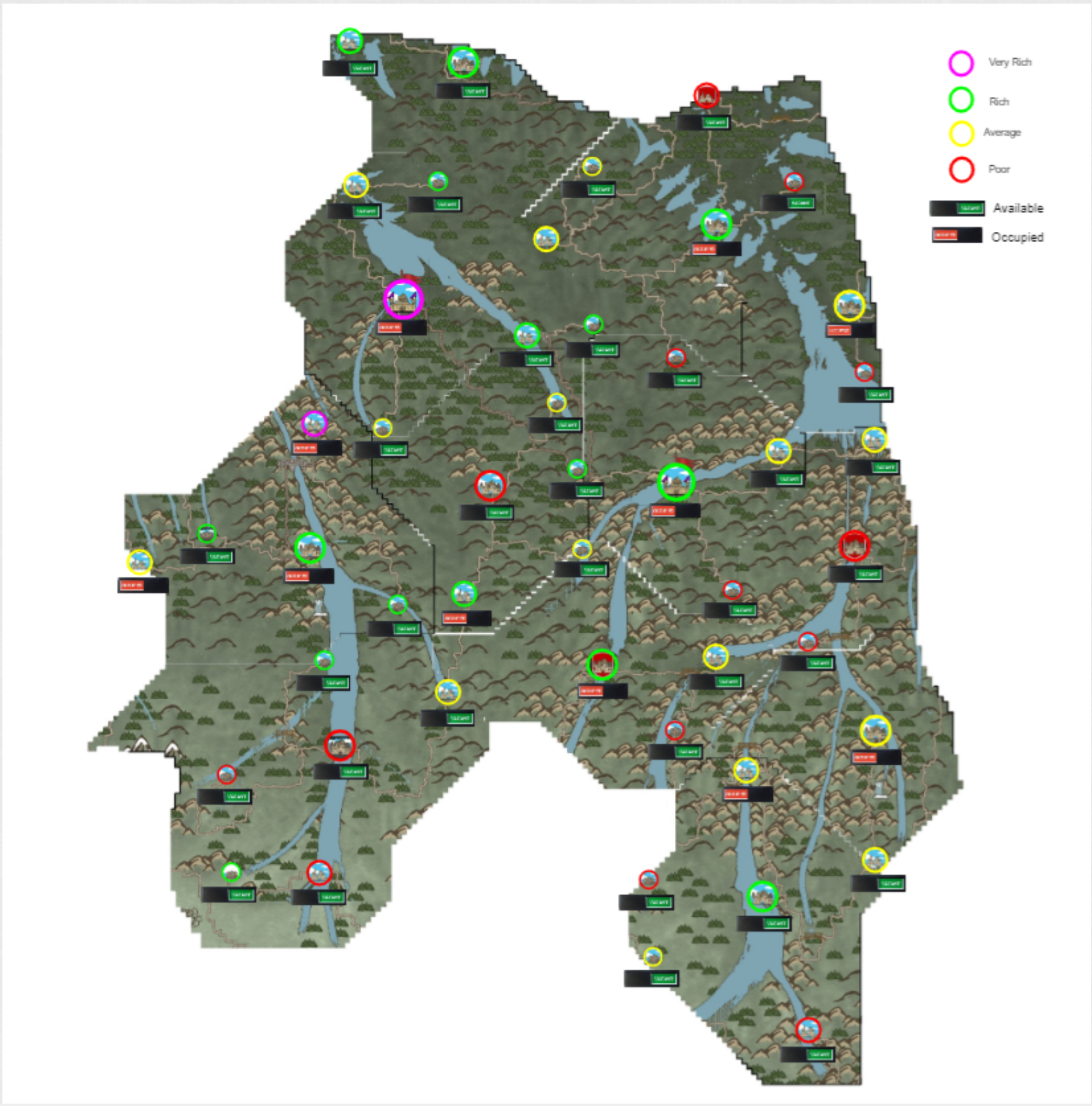 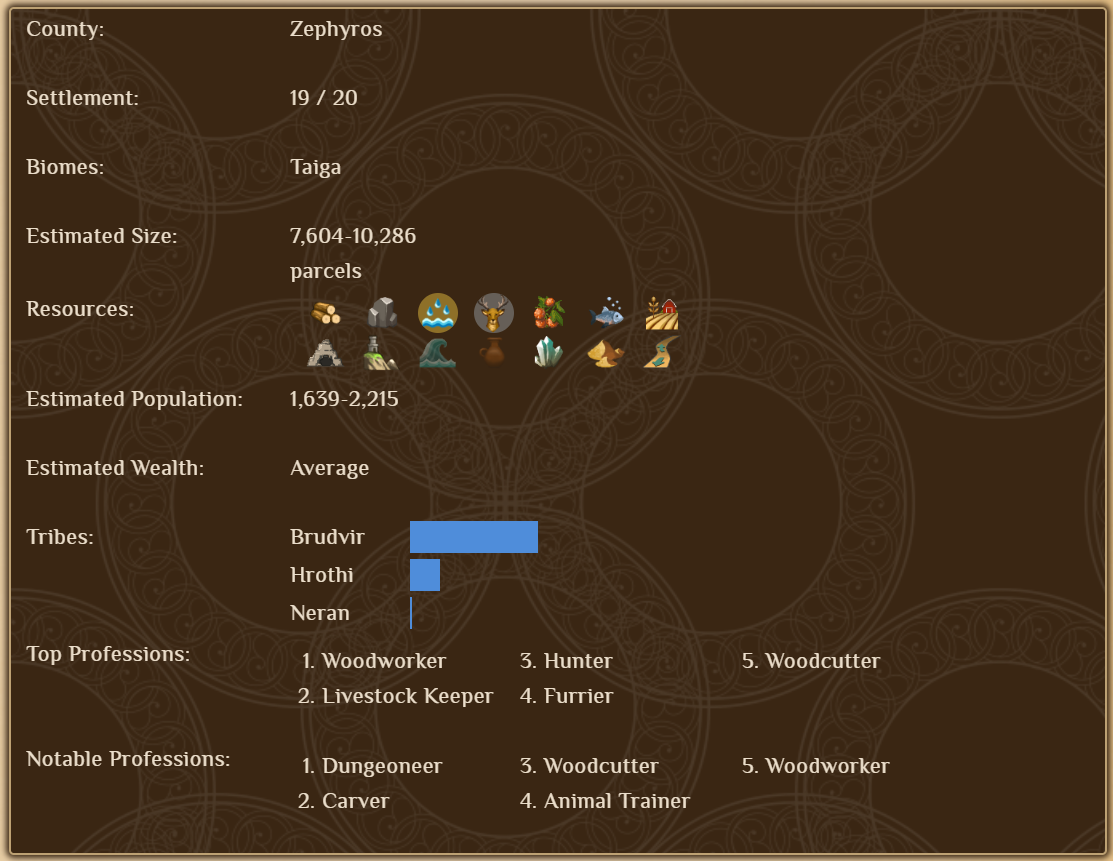 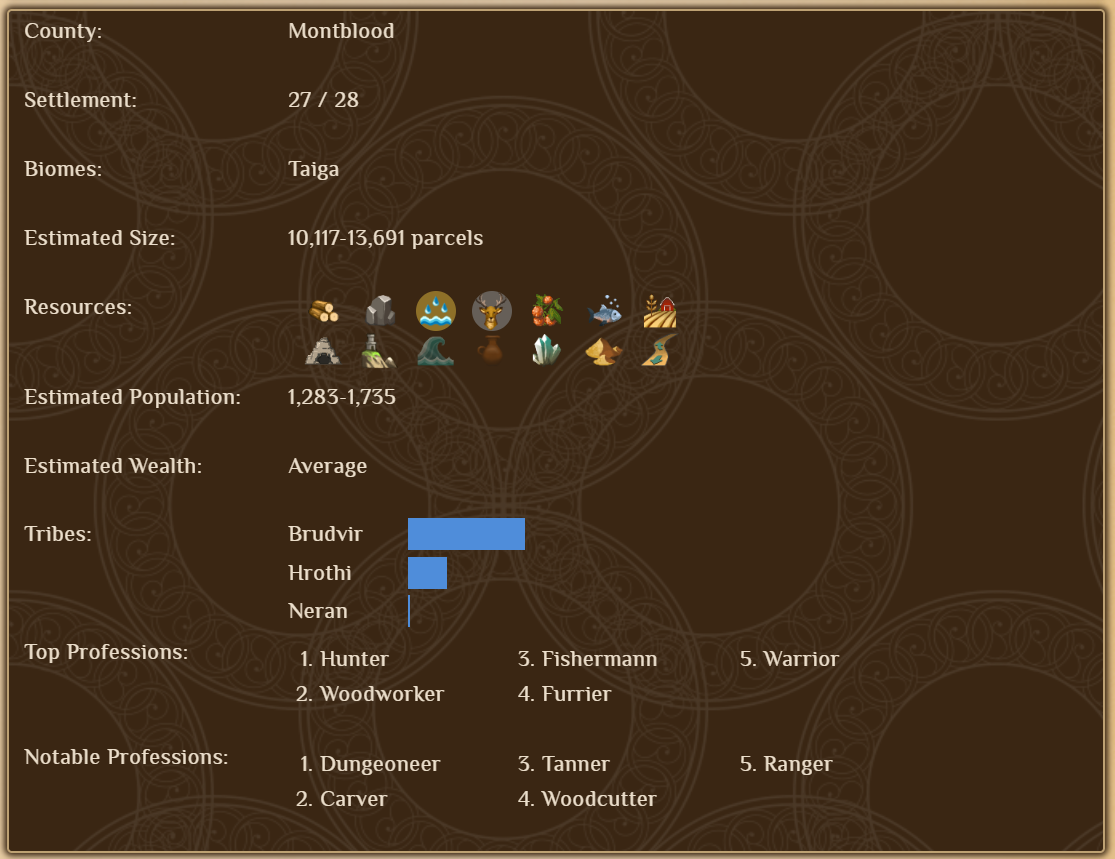 Zephyros is a 12x county and the home of Duke Zephyr XII and Duchess Hela Dracul within The Anemoi. We will be targeting Brudvir/Hrothi tribes. For biomes we are looking at Taiga(forests), mountains, lakes and rivers.

Long ago The Anemoi was an untouched paradise of mountains, forests and lakes. Within this paradise rests The Stone. Over the centuries many have been drawn by its power. The nature of The Stone has attracted all manor of folk interested in the animal trades. What started as an untouched paradise grew into a resource heavy economic power. Tradesmen, labors and nobility alike from across the kingdom ventured to see the wonders of The Anemoi many deciding to set up roots. As word of The Anemoi spread the legend grew. Secrets and stories whispered at night tell of warriors fighting alongside vicious beasts, cities the size of counties, herds large enough to feed a kingdom and a view that would bring a hrothi to tears.

Duke Nimb Zephyr XII a sworn protector of The Stone and descendant of the founder of The Anemoi. He was raised and trained in the tradition of capturing and taming beasts.

Behind the keyboard I am a 37 year old man that has been gaming since computers came as a pile of pieces you had to assemble with a soldering iron. I’ve played most major MMOs led many communities, participated in even more and have learned when to be patient as well as when to kick over the table raising a bit of hell. My longest played game would be Everquest for over 7 years. I’ve played almost every other major MMO since then.

I happened upon Chronicles of Elyria by accident and couldn't tear myself away. The idea of a game with lasting consequences and an ever evolving world got me hook line and sinker. I have searched for a game like this as the next evolution above a traditional mmo for more than a decade.

Duchess Hela Dracul suffered great loss at an early age that fueled her obsession for the arts of alchemy. Her travels for knowledge of the craft brought her many places and also helped her meet Zephyr where she continues to focus on the wonders of alchemy in the Eitr Apothecary aiding the people of The Anemoi. Outside Elyria I am an artist who has always loved PC gaming. As a child my dad gave me a Commodore 64 and I was hooked. I have run many communities in SWG and Wow as well as leadership roles in other MMO's. CoE Elyria caught my eye for the same reason I am sure it did for most. Something different, fun and were what you do matters. The ambition of this game is something I will always stand behind and show my support for.

Who are we searching for?

We are actively recruiting for Barons or Mayors interested in being part of the community.

Within The Anemoi, Zephyros is in a great spot for those looking for Mountains, forests and lakes. If you are wanting to work with animals or their products, mining, or smithing you will be well at home. Every trade or craft is welcome and can easily find a safe haven within The Anemoi.

Our priority in recruits are people that are friendly, ambitious, sociable and willing to collaborate with the community.

Why should you join Zephyros?

Zephyros is seeking to assist and improve the standings of the community. To meet this goal Zephyros plans to support the crafters, miners, soldiers, and civilians that join Zephyros.

Members of the community are encouraged to work together and strive to create self sufficient sub-communities. Those who take it upon themselves to attack or harm our community will be met with quick and terrible force.

Each member of the County is part of our community and is treated like family. We stick up for our own and hunt down those who would harm or wrong anyone within our community.

We have 14 unpledged settlements that are villages or larger

The Anemoi Schoolhouse of Survival

Servants of The Stone

Join us on discord

Simply Click to Join Discord. A member of leadership will greet you and do their best to answer any questions or concerns you may have.

Gods save the Duke and Duchess!

Glad to have the additional mayors that have recently joined us!

Checking in as a Mayor/Baron scanning the maps for D&SS planning.

Both Counties Claimed!!!! We are recruiting Mayors join today!

Zephyros is a 12x County with 48 total settlements and the seat of power for The Anemoi!

(Technically two 6x counties that will be merged after launch.)

We are recruiting additional mayors.

We pick based on IP order. This image denotes what our people would pick if no one else picked within our county.