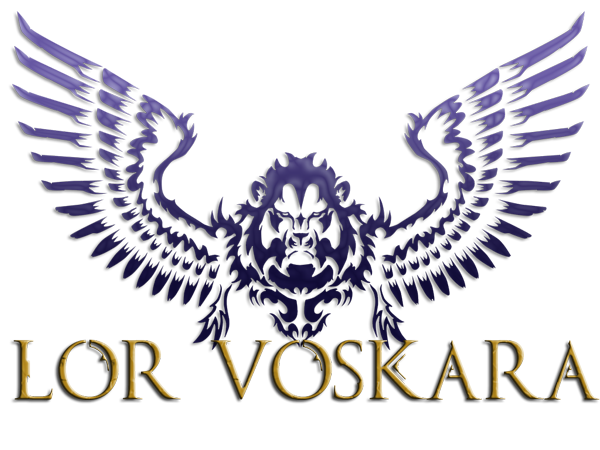 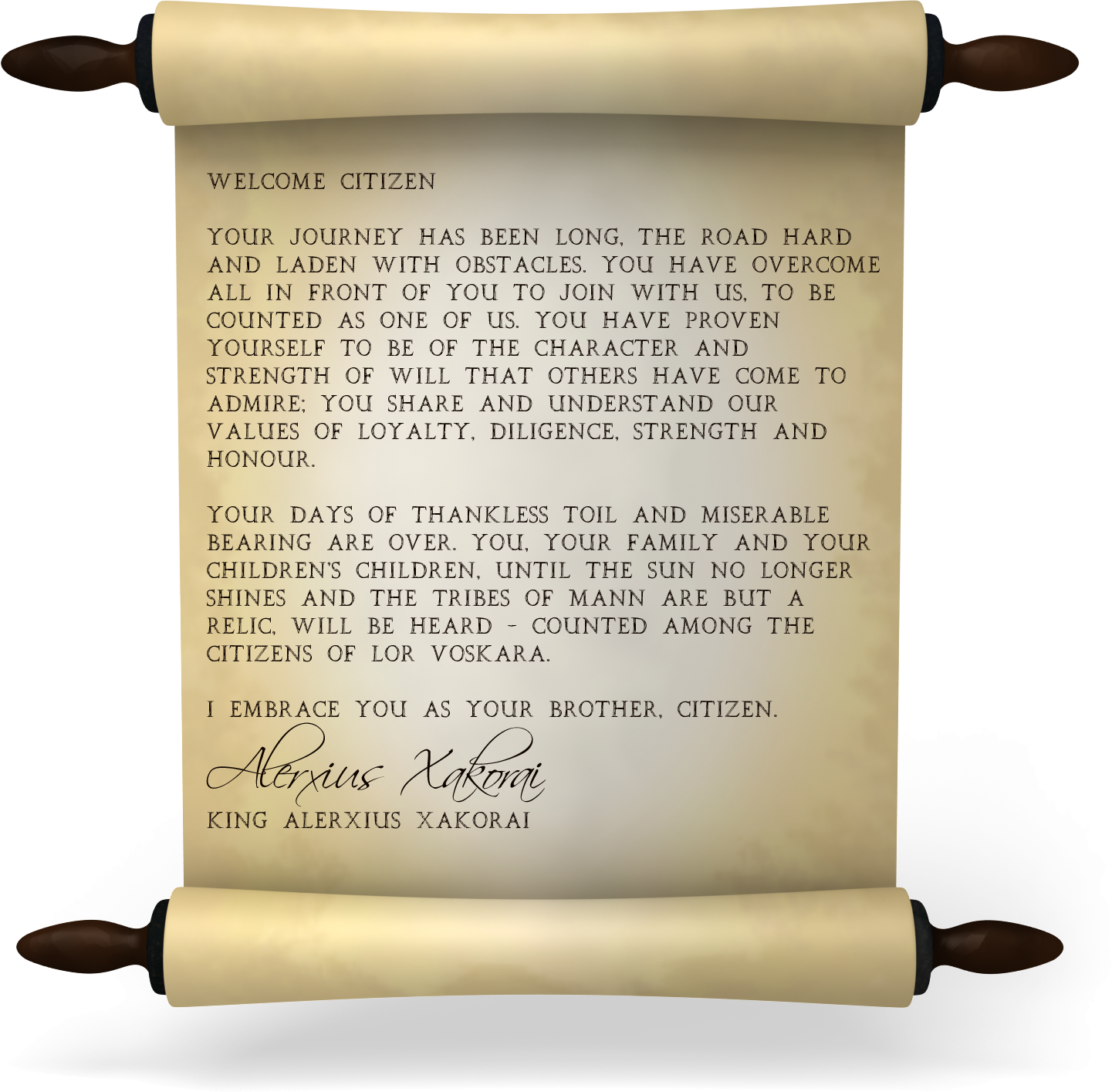 Lor Voskara, situated on Oceanus (APAC server), is ruled over by King Alerxius Xakorai and was founded shortly after the store update. Boasting a community of like-minded people, citizens can expect a kingdom based on the principals of community, strength and prosperity. All citizens will enjoy a structured, inclusive and active community where emphasis is placed on coming together to help each other achieve common goals.

Lor Voskara draws inspiration from many thematic elements and amalgamates these with modern expectations of what it means to be part of gaming community. The result is the freedom to create what you want within a subtle overarching theme and familiarity. Lor Voskara builds upon these influences and makes it our own, creating something unique and immersive for its citizens. Some of the more prominent thematic inspirations include: 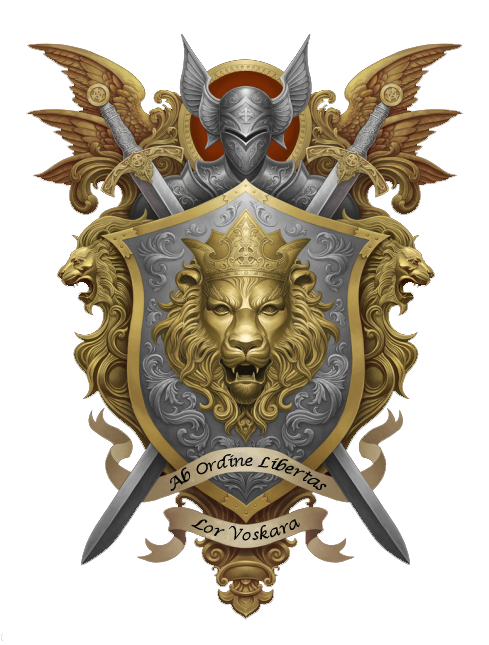 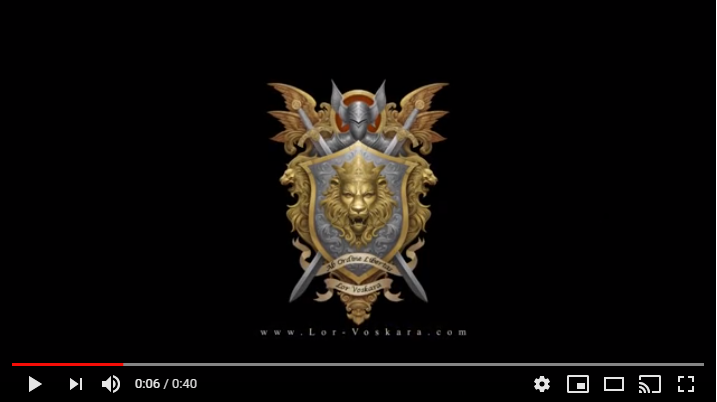 A core foundation of the Kingdom is understanding that we build around two considerations, primarily;

We build our structures and organise around what it means to be part of a gaming community with practicality and functionality in mind. This means there are meta (non-in game) considerations that help us administer to the community and provide an environment that allows our citizens to clearly identify where they belong and where they want to get to – mapping out connections between citizens and groups and making it easy to organise the community.

Around this structure we build a thematic (role play) element that allows for an immersive view of why these things are how they are in-game. This could be viewed as Lor Voskara’s unique culture in Elyria. This is very much an elective choice that is provided to allow citizens, who wish to do so, to immerse themselves in their play environment and interact with our structure in a flavourful way.

Alerxius Xakorai (Omicronus) backed at the king level just after the update to the store pledges. Not being satisfied with the values and direction of the different communities on Oceanus (APAC) King Xakorai decided to put his money where his mouth is and create the kind of community he wanted to be a part of – and so Lor Voskara was founded. Needless to say Xakorai is financially and emotionally invested in nurturing a kingdom that is not only functional, but a pillar of the APAC community.

While being approachable and not easily shaken, King Xakorai is also a strong believer in meritocracy and hand picks individuals who display drive and initiative for leadership positions, regardless of any physical ‘rank’. The best people for relevant jobs are selected on life experience and what capabilities they can bring to the table to better the kingdom and game experience for the community.

Becoming a part of Lor Voskara means you are becoming part of a mature, active and supportive community - this provides a unique experience and environment for citizens:

Lorandor is the royal seat of the Kingdom of Lor Voskara, ruled by House Xakorai. Situated within the Grand Duchy of Rh'torum, Lorandor is the cultural and spiritual heart of the Kingdom and boasts the finest academies and institutions available to citizens. Lorandor is about perfection in your chosen field and the ability to self express to maximise creative potential. To this end King Xakorai has long held to the belief that the arts, scientific research and religion should go hand in hand to enhance the potential that is Lorandor and Lor Voskara as a whole.

Ki Nora stands as the vanguard of Lor Voskara, formerly lands that saw warring clans fight for resources and territory, Now united under the leadership of the house Valentine work together to focus on the betterment of itself and its kingdom by war games, festivals and trades. Mimir, its capital resides in the mountain ranges of the duchy where it keeps watch of the borders between it and the other kingdoms while keeping a balance between rural and military aspirations while using their large port for trade and naval avenues. Ki Nora embodies the ideals of growing stronger from the chaos of the world and chooses to find a way to live within life's challenges and hardships instead of working to suppress these trails that would see their people overcome and rise above such things with not only strength but the wisdom of it.

Salt of the Earth

A collection of hunters, gatherers and frontiersmen that provide food and basic produce for the people of Elyria. Being part of Salt of the Earth you know what it means to venture out into the wilderness and live by your wits, axe and arrow and you can do so with like minded people. If you want to make a living off the land with your huntsman instinct Salt of the Earth is the guild for you.

The Wyrmberg is a smithing guild founded by Count Valegor and Davheid. Our primary focus is metallurgical research and providing superior quality products through both skill and materials. We are looking for Smiths (all kinds), Leather workers, Tailors, Tinkerers, Jewellers, Fletchers, Bowyers and Gatherers at this time. If you take pride in your work and strive for quality, then we want you whether you're casual or have ambition to acquire Legendary status.

Those who live by the sword, die by the sword - but they need not die alone and poor! Wind Riders is a registered mercenary company based out of the kingdom of Lor Voskara where budding sell swords and warriors can ply their trade in a professional military band free of long term commitments. Currently accepting all manner of prospect and front line soldier to fill its ranks.

The Voskaran Registering House provides the contractual connection between someone who needs something done and the person that can get it done. Need a lot of wood but don’t know a lumberjack? Going on a dangerous trade journey and don’t have any guards? Need something delivered but don’t have the time? Place your interest with the Voskaran register and they will advertise your problem to potential problem solvers and handle drawing up the contracts. Get things done and get paid with the Voskaran Registering House!

Do you want to earn glory for yourself? Want to reign supreme in armed combat? The Banner breakers are for you, within our walls there is no unfair advantages. Every fighter has the equal chances to take on their opponents so if that's for you, you should take on the Banner breakers challenge. Win your fights, take your rewards and earn your glory.

When great churches, monasteries, castles or manor houses are toward, the Masons come into their own. Working wonders with stone, the Masons are a guild of grand architects and craftsmen, a society of aristocrat among the workmen and boast of an ancestry of incredible age and distinction. The Craft carries noble traditions and has dignity of a high order to maintain. Moreover, it has secrets which at all costs must be preserved and an esoteric philosophy which is rooted in the lore of the past.

Athenaeum of the Arcanus Lexicon

This Kingdom of Lor Voskara guild intends to have libraries across the Kingdom dedicated to Chronicling the Kingdom's history, laws, public records and the like will be stored here. Attached to the guild is an association called Arcane Seekers which is a group of relic hunters which goes out and seeks relics for the King and his scribes to study.

This association is attached to the Atheneum of the Arcanus Lexicon. It's primary directive is to seek relics for the Kingdom to study.

“He makes the coffins, you write about the battle, and I supply the corpses.” – Marshall Valen Xakorai, describing the caste system.

Why the caste system:

Based loosely on Georges Dumézil's trifunctional hypothesis, Lor Voskara's caste system attempts to clearly define what each member of the kingdom is doing and creates a familiar ‘role’ that citizens would be comfortable with in a more traditional MMO. It also helps identify gaps or needs for the kingdom and provides opportunity for citizens to become involved or connect with services they require – strengthening the community as a whole.

The caste system is not restrictive and any lore surrounding it is just to provide flavour. Functionally a citizen can change their caste at any stage they wish.

Lor Voskara society is structured around three quasi-ethnic castes. Membership in a caste is generally a hereditary matter - children of parents from one caste will usually follow their parents. When coming of age, children who have a deep feeling for a different caste can join that caste, but this must be announced or the child will be caste with their parents to lessen administrative burden. The castes are not as limited as their titles would suggest, and to some degree try to be self-sufficient. Often misunderstood as purely mystics, the Scholar Caste is actually one that concerns itself with the cultural advancement of the Kingdom. They are academia, religious figures, followers of the arts and officials. The Scholar caste provide the identity that is the Kingdom, they are primarily concerned with: Members of this caste serve as the soldiers of the military, protectors of the citizenry of Lor Voskara, adventurers and sell swords. They are occupied with training, coordinating or engaging in skill at arms. The Warrior caste provides the strength and skill for the citizenry to live free of fear and oppression and are primarily concerned with: Traditionally, workers are the most numerous of the castes and represent a significant portion of the citizens of the kingdom. This number is both reflective of the scope of the business that workers conduct and foundation by which they allow the kingdom to flourish. Worker caste citizens are primarily occupied with:

Above all else Lor Voskara is a meritocracy, meaning those that contribute to the community are rewarded. Each title a citizen accumulates is a reflection of their willingness to support their fellow mann and put the Kingdom and its needs before selfish desires. 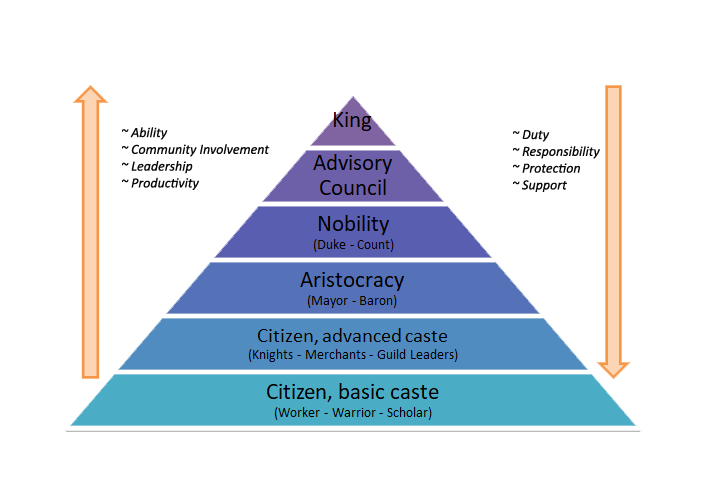 These individuals support the king by offering their advice, ideas and expertise on all levels of Kingdom business. They are appointed because of their unwavering dedication to the Kingdom and their continual and ongoing contribution to its success, in this they are given specific authority to act on behalf of the King. Membership is by invitation only and there is no rank or title restriction on becoming a part of the Advisory Council.

Consisting of those that hold the granted title of Mayor or Baron, and all variations thereof, these individuals govern and make productive their localised holdings within their liege lord’s demesne. Working with their liege lords to achieve mutually beneficial outcomes, the aristocracy is free to manage their holding and their patrons as they see fit within the over aching laws that govern the Kingdom or their contract. An aristocrat that shows suitable drive, determination, commitment to the community and potential will be raised to the title of Count/ess through whatever means necessary, as long as doing so brings no harm to the stability of the Kingdom.

Consisting of those free men and women who hold no title but may hold land. The citizens of the Kingdom are free to peruse whatever profession, activity or career they wish within the overarching laws that govern the Kingdom. Citizens are roughly broken into two groups:

Citizens that show suitable drive, determination, commitment to the community and potential will be raised to the title of Aristocrat through whatever means necessary, as long as doing so brings no harm to the stability of the Kingdom. 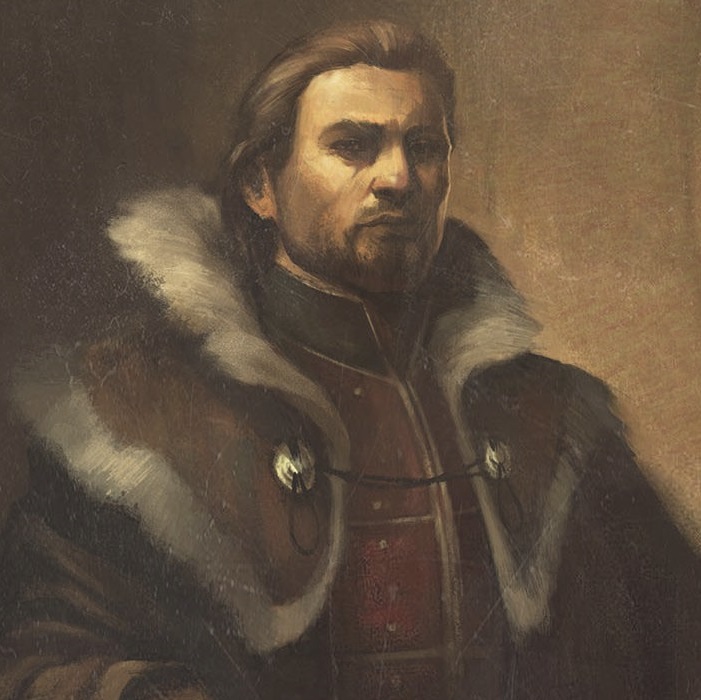 This kingdom and post receive a seal of approval from Zooka of V. :)

Thanks for your support!

Very active and friendly community. Look forward to be working with the King and Queen.

Looking forward to seeing how this kingdom grows and influences the world.

Looking forward to be working with KING and queeny and all my friends new and old. Remember... If you want a horse come to Bloodwolf Breeders first!!