Welcome to Part Two of the three-part series on souls. Last week’s article: Design Journal #1 - Introduction to Souls, talked about what a soul is, how souls utilize skills ramps with reincarnation to create a feeling of progression in the presence of permadeath, how souls get more powerful with age, and most controversially - Talents.

This week we’ll examine the first two phases of character creation, including soul selection and birthdate selection. As part of the coverage on birthdate selection we’ll take an in-depth look at the Destiny system and how it’s different from traditional quest and story engines.

We’ll conclude this week’s design journal with an introduction to Achievements and the reassuring fact that you’re not alone in the world. Your spiritual double may be trying to kill you, but at least you’re not alone.

Before I forget, I promised the very active community over at ChroniclesofElyria.com I’d slip an Easter egg into each design journal. Pay close attention, somewhere here-in lies the subtle hint of a previously (and still) unannounced feature. 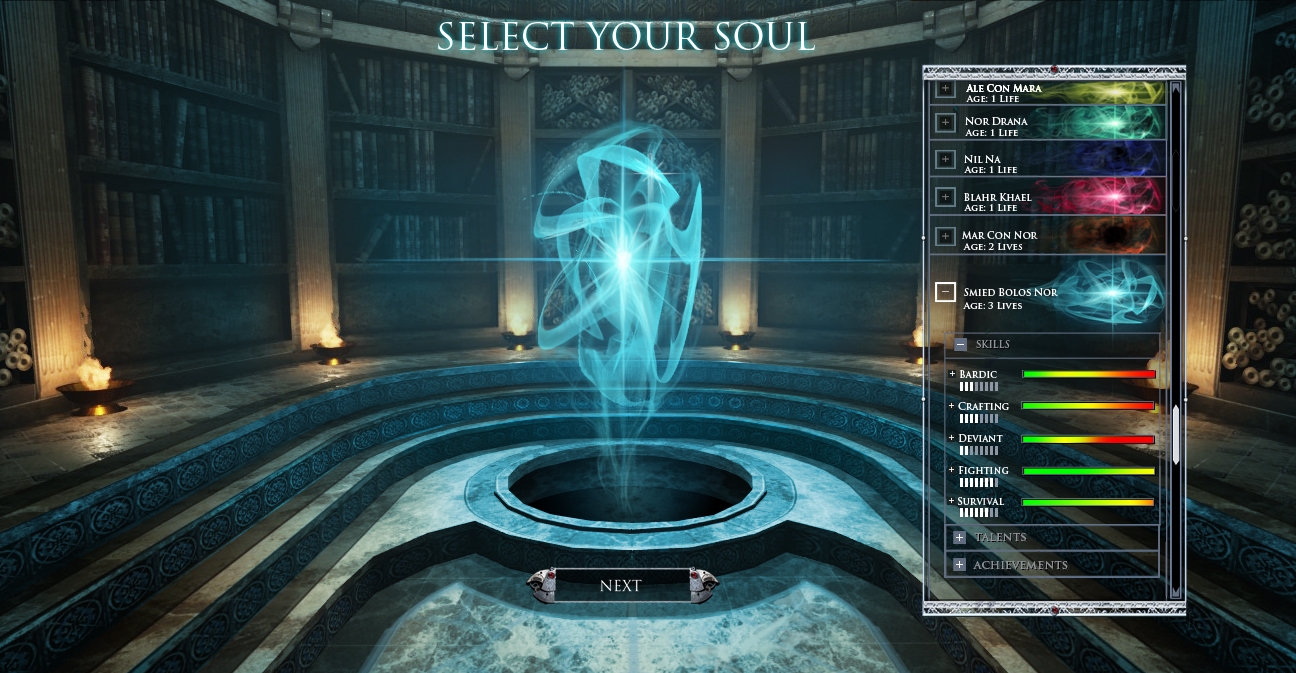 Character creation in Chronicles of Elyria is a multi-step process that takes place entirely within the Soul Chamber. As mentioned in last week’s design journal, the Soul Chamber is where souls go in order to rest, recuperate, and plan the time and place of their next incarnation.

The first step in character creation is to select which soul you want to use. In the soul selection screen (See Figure 1) you can see the name, age, affinity, skill ramps, talents, and past achievements of each soul. That latter two, Talents and Achievements, won’t be visible the first time you play a soul.

Happy Birthday to you!

The second phase of character creation is birthdate selection (see Figure 2). This might seem like an arbitrary step but it’s actually extremely important. Selecting your age does three things. First, it helps filter out which families you can join in the next phase of character creation. Sorry, no twenty-something families with 40 year-old children. Likewise, the retired farmer and his elderly wife are too old for your energetic youthfulness. If you want to join a family, you’ll need to make sure your character’s age lies within a reasonable window of what is feasible (read not creepy).

The second thing selecting your birthdate does is, well, determines your character’s starting age. The younger your character begins the more time you’ll have to tailor their skills to your liking. This is especially true if you create a teenager. Creating characters less than 18 years old gives you a period of advanced skill development called “Adolescence”. During this time, characters gain new skills more rapidly as a way to experiment with different skill trees. But, being an adolescent isn’t all it’s cracked up to be. Starting with an older character means more financial stability, an established occupation and skill tree, and more time focused on building a family and settlement.

The final thing your birthdate does is help define your destiny. The Soulborn Engine uses a form of astrology to determine the types of conflicts your character will encounter as they roam about the world. At that precise moment your character is born, each celestial body holds some position in the heavens - their gravitational force pulling you in different directions. Like a map of the future, the position of each planet charts a course that dictates the theme of your character’s life and the types of obstacles you’ll face. When your character finally grows old and dies, the passing of time will necessitate a new birthdate, and with it a whole new set of adventures.

Your Destiny Chooses You!

People have come to think of NPCs as the quest dispensers and story-tellers in modern MMOs. To experience more game content players move from one quest hub to another, looking for the next NPC that will drive the story forward. Chronicles of Elyria works the exact opposite.

The moment your character is born some large set of story quests are dynamically generated and silently follow you around wherever you go. Any time you come in contact with another NPC, loot an item, reach a certain age, commit a crime, or a slew of other things, the Soulborn Engine looks at your pre-defined list of plot hooks to determine if any of them have been triggered. Like a key turning a lock, if everything lines up and all preconditions have been met a story will unfold. You could spend twenty Elyrian years searching for your destiny, only to retire to your farm and launch a story arc digging up some artifact while tilling your fields!

You Choose Your Destiny!

The designers and writers at Soulbound Studios are working on a 10-year story that, like a “Choose Your Own Adventure” book, allows players to select which path the story will follow. As players take individual and collective actions, scripted events will trigger that drive the story toward the next closest checkpoint.

These player choices could be anything from killing an important NPC or player, to building a village at a pivotal location on the map, to killing off a species of animal, to a character entering the world with a specific birthdate. The point is, even something as seemingly innocuous as being born can alter the course of history. And even more interesting, we at Soulbound Studios will be just as surprised as you when these world events occur!

As a side note, everything we’ve talked about thus far applies in a broader sense to your soul as well as your character. Each soul has a set of pre-determined themes and conflicts which characters will face during the course of play. Unlike those things tied to your birthdates these themes and conflicts can be spread over many lifetimes and you may not encounter them for years to come. Likewise, each soul has a set of possible roles to play in the ongoing 10-year saga, but it’ll be up to you to determine how you respond.

For many people the idea of destiny, pre-determined conflicts, and a road map of their overall play experience is a scary and claustrophobic idea. Players want to feel like they have a destiny without feeling constrained by it. That’s where affinity comes in.

A soul’s affinity is its tendency towards light or dark and is visible within the Soul Chamber. A soul is first created with a neutral affinity but it will not remain that way for long. Player actions leave a mark on the soul, blessing or tainting it. As a result, souls gradually develop an affinity one way or the other.

Your soul’s affinity is respected by the destiny system and the dynamic story engine. Conflicts and story arcs will initially be presented with no indication of the preferred outcome. It will be up to you to determine the best way to resolve the conflict. As your soul lightens or darkens, the story engine will learn from what you’ve done and act in accordance with your chosen affinity. While you might have once been asked to just talk to a player, you may later be asked to pick someone’s pocket, and then eventually to maim or kill someone.

Be warned, affinity is a slippery slope. Once you move to the light or dark it becomes more and more difficult to resist. While not impossible, the Soulborn Engine will be giving you tasks and objectives which it believes best suits your nature. Doing the opposite will mean failure and there will be consequences for your action. 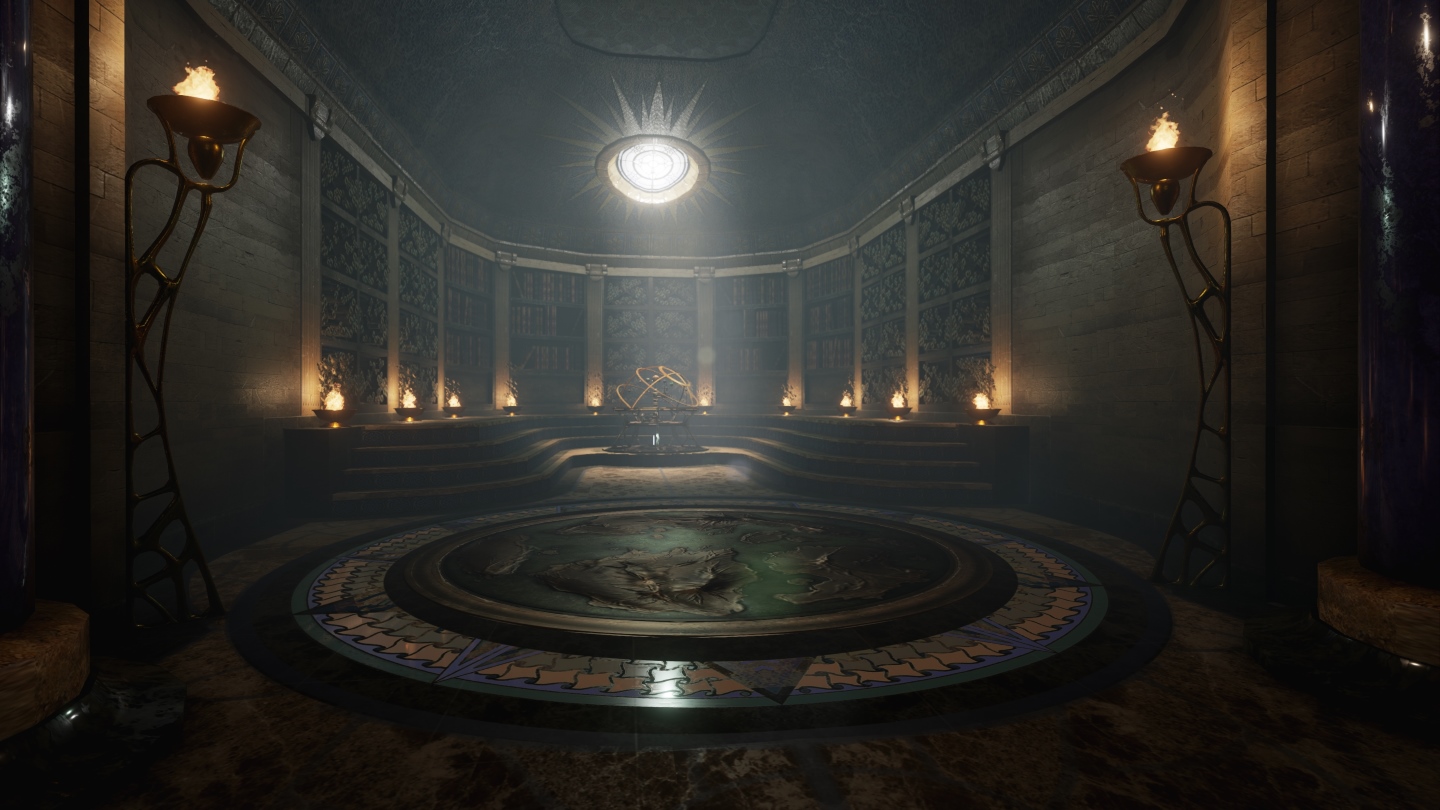 First, and perhaps most important, Achievements in Chronicles of Elyria are rewards given to players for participating in the story. That means fulfilling the requirements for completing an Achievement always has a measurable and recognizable impact on the world.

In exchange, earning an Achievement comes with passive (and sometimes active) bonuses which can include new abilities, changes in social status or reputation, titles, and fame.

Second, there are three different types of Achievements in Chronicles of Elyria:

An example of something that could be completed by anyone would be killing a daemon. While not common, it is possible, and in addition to other cool benefits comes with the title of Daemonslayer.

Being crowned Champion of the Colosseum is something that may only be achieved by one person at a time. These types of achievements will often be held by the same player more than once.

Finally, killing a specific, legendary evil is something that can only ever be achieved once. It should be noted that these achievements may be given to multiple people simultaneously, but there will never be another opportunity to earn the same Achievement.

Finally, Achievements are bound to the soul. Once attained, an Achievement becomes a permanent part of a soul’s memory and past-life experiences. Once the character ages and dies the Achievement will be listed on the Soul Selection screen as a reminder that the Achievement was completed by that soul.

With that said, reincarnation is a trying experience. Death, and the process of rebirth, leaves a soul without its full memories. As a result, benefits from past-life Achievements may not be fully realized upon character creation. Instead, characters will exist with partial or secondary buffs until such time as their new character is able to complete the same Achievement again (if possible). This process of re-completing a past-life Achievement, referred to as Déjà vu, unlocks the Achievement’s full potential - this time with compounding effect.

We all want to believe there’s someone out there who shares our same feelings and goals. Someone who fully understands us. Someone who truly loves us. Unfortunately, we can’t tell you if that’s true or not. What we can tell you is you’re likely not alone.

Each soul has a kindred spirit, a twin, a soul mate that is identical in every way. If a soul has a talent, the twin will have a talent. Whatever the destiny of the soul, the twin shares the same destiny. This permanent link between souls results in several mutual benefits.

First, the closer soul mates are to one another the more aware they are of the other’s presence. Within some limited distance a soul mate can always locate their twin.

Finally, the shared connection between soul mates acts as a battery to their spirit. So long as they are near each other, and so long as their bodies can endure, a soul mate separated from their body will always have sufficient spirit to find their way back from the Astral Plane.

Sounds great, right? There’s a catch. Soul mates only begin their existence as twins. Each soul lives their own lives and develops an affinity toward light or dark. While their destinies are inexorably intertwined, there’s no guarantee they’ll lie on the same side of the cosmic struggle when they meet.

Most importantly, soul mates whose affinity go in opposite direction become diametrically opposed to one another. To that end, there is only one way to get past such an antagonist – separate their soul from their body and send them back to the Akashic Records.

Next week we’ll conclude our look at the Soul System in a Design Journal about Aging and Dying. In addition to learning more about the effects of aging on your character, you’ll learn about the difference between maiming, dying, and permadeath. Finally, next week’s design journal will include a sneak-peak of some in-game footage of the Astral Plane – the place your soul travels to when separated from your body.