A Closer Look at Gathering & Resources

When a character dies, their soul gets returned to a player to be reincarnated, thus carrying forth the memories and knowledge of past lives. Their possessions can be willed to their heirs to be regained later, and their reputation lives on as separate, distinct entities, potentially adopted by others, or even changed throughout a character's lifetime by way of disguises.

Going back to the three dimensions of progression, these four archetypes can be thought of differently, each as an expert along the spectrum between “what you know,” "what you have, "what you’ve done.” The explorer deals largely in information, whether they are actual explorers, knowledge brokers, or spies, their progression lies in what they know. On the other end of the spectrum, champions are almost entirely defined by their deeds and actions. In the middle, you have archetypes which focus on what people have. It’s the role of the gatherers to collect the raw resources of the world and process them into usable materials, and it's the role of producers to create the products used by others. Both gatherers and producers drive the economy of CoE and KoE.

Why spend so much time analyzing something as simple as gathering and producing and their role in CoE and KoE?

Fundamentally, we feel it's important that we give as much care in the design of these systems as any other prominent feature. We want resource gathering and production to be as enticing as adventuring.

Gathering in KoE is represented as an abstraction of gathering in CoE. In Chronicles of Elyria, players use tools to interact directly with the objects of the world around them to obtain raw resources. Whether that’s using a spile to get sap from a tree, a knife to cut off the bark, or an axe to cut it down. KoE does the same thing, but rather than having you swing an axe specifically, you instead instruct your character to go chop down a tree, gather bark, or pick apples using the user interface; the game's AI does the rest. 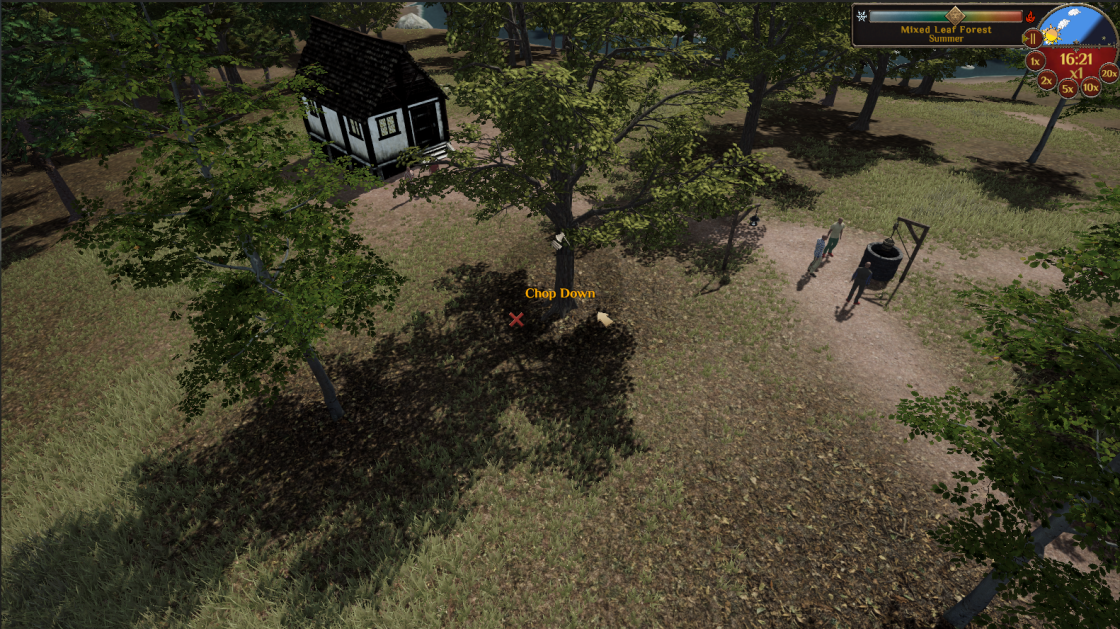 If you instruct your character to go pick berries, they’ll find a bucket first. If you instruct them to cut down a tree, they’ll find an axe. This approach to minimize micromanagement is also used by non-player citizens to ensure their survival, while meeting their contractual obligations.

When it comes to gathering and processing resources in Kingdoms of Elyria, whether that's picking berries from a bush, skinning a dead animal, or hitting a stone with a pickaxe, under the hood characters are performing one of three actions against a target with a specific tool type. They are either "extracting", "harvesting", or "destroying."

Extracting is the term we use for gathering a single, primary resource from a target. A good example is picking berries, apples, or other fruit. The idea is that when extracting a resource from an object you're taking only a single resource, and are otherwise leaving the target largely intact, with many objects allowing you to extract a primary resource with just your hands.

The second form of gathering is "harvesting." When harvesting you're using a different tool to gather more than one type of resource at once, usually as a compound resource. For example, cutting a branch off a tree with a blade "harvests" the branch. In doing so, you're getting a compound resource (the branch) which can be further processed to gather things like fiber, leaves, blossoms, and more fruit. Harvesting often comes with trade-offs, such as limiting the amount of a primary resource you might get in exchange for the ability to gather more quickly, so you can further pick off the primary resources from the compound resources back in the safety of town. At the same time, harvesting is often the only way to get certain resources. As one example, harvesting a potato plant gets you not only the plant leaves, but the tuber as well.

The final form of gathering is called "destroying." This converts a resource node, organic or inorganic, into piles or stacks of resources to be collected. The best examples are mining stone or cutting down a tree. As with harvesting, destroying a resource renders it unusable for producing any further resources, and often comes with tradeoffs. Cutting down a tree grants you the wood, but in the process, you'll lose some of the branches, fruit, bark, and sap.

One thing we're doing differently in CoE and KoE in comparison to other games is splitting the role of collecting and processing primary and compound resources into usable materials from that of producing components and finished goods. We're doing this to emphasize depth of trade-skill rather than breadth. We’re aiming to create an environment where characters can prosper by doing a handful of things well, rather than feeling like they need to do everything. The key here is trying to avoid traditional genre pitfalls by avoiding the "the one-man economy" seen in theme park MMOs. 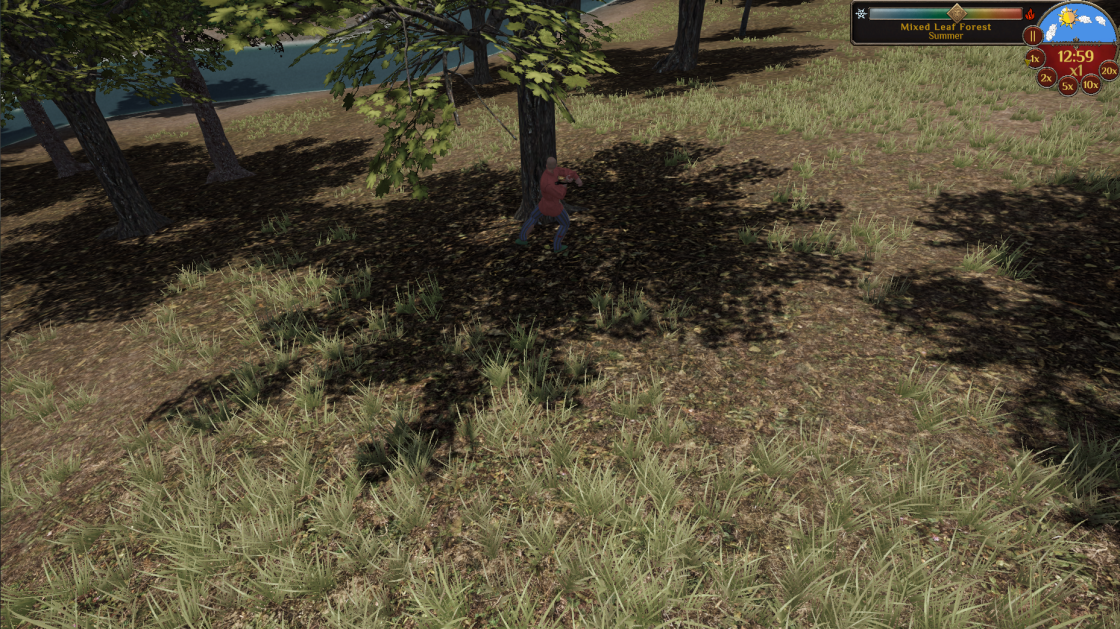 So, what are the different types of resources and materials in CoE and KoE?

Well, when beginning the design of Chronicles of Elyria we spent a significant time looking around at all the things we "have". These generally fit into categories of want and need, but spanned dozens of different categories. Without trying to list them all, they include things like:

After looking at all the things we "have," we started looking at all the materials used to make those, which I began by dividing into organic and inorganic materials. From there, I worked backward to find the raw resources. A non-exhaustive list might include things like:

The above list only scratches the surface of resource scope, as many of those are themselves entire lists. With so many items to harvest, how do you keep track? That's where our system of knowledge and techniques come into play. Without wishing to get too technical, one of the things we're implementing in CoE and consequently in KoE, is setting up bi-directional communication between you and your player character. Whenever you want to instruct your character on what to do, whether that's swing a weapon, or use a station, you do so using learned techniques. These techniques represent what you as the player have unlocked, and often require player skill to progress as far as possible using a technique. 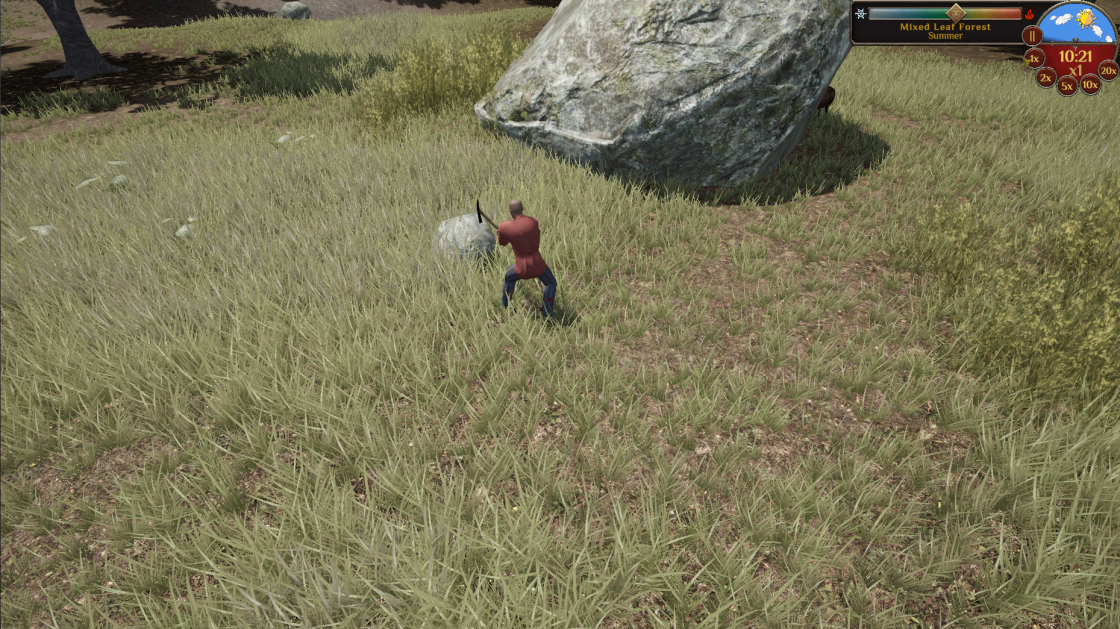 In KoE, this is done slightly differently; you not only have a player citizen with their own skills, but also an entire settlement to manage. In turn, your character can develop knowledge and skills like any other character, however, more frequently you're going to be focused on the types of buildings to create and resources to plant. As such, unless you know a skill personally, information is presented in an abstract way, based on the accumulated knowledge within your settlement, to the degree necessary to help you make informed decisions on how to run your settlement.

Gathering is fundamental to character survival, a fully realized functioning economy, and in creating a sense of immersion in both CoE and KoE. We aim to make gathering as robust and enjoyable as adventuring, and while the process of gathering and production is largely abstracted in KoE, it's still filled with subtle complexity that we hope will not only be fun in its own right but will also go a long way towards helping people become familiar with the "easy to learn, difficult to master" approach we're taking with Chronicles of Elyria.

Cutting Through The Fog In Kingdoms of Elyria