Home > Blog > It Takes An Adventurous Spirit
4 May

It Takes An Adventurous Spirit

In the last couple sprints, we have been working on a variety of areas that are bringing us toward our Pre-Alpha Experiences. When we work, we try to think of it as an adventure. As such, we form adventuring parties who take on quests, contracts, or bounties (AKA user stories, individual tasks, or bugs) because
A) we are nerds
B) it brings us closer to our own game
C) it helps us adopt the right frame of mind for the work before us

The party members get moved around from adventure to adventure, but each person brings along a certain set of skills and knowledge that will be useful to the party. Our current adventuring parties are:

This party is preparing the horse for riding by creating a slough of animations, tack, and making nice-looking hair on it. While other beasts of burden will be in the game, the horse is still one of the top creatures for working alongside many of the Tribes of Mann. Whether it be riding, drafting, farming, and more - expect to see horses in Elyria. The horse will be in the Prologue which is why we are working on this now. 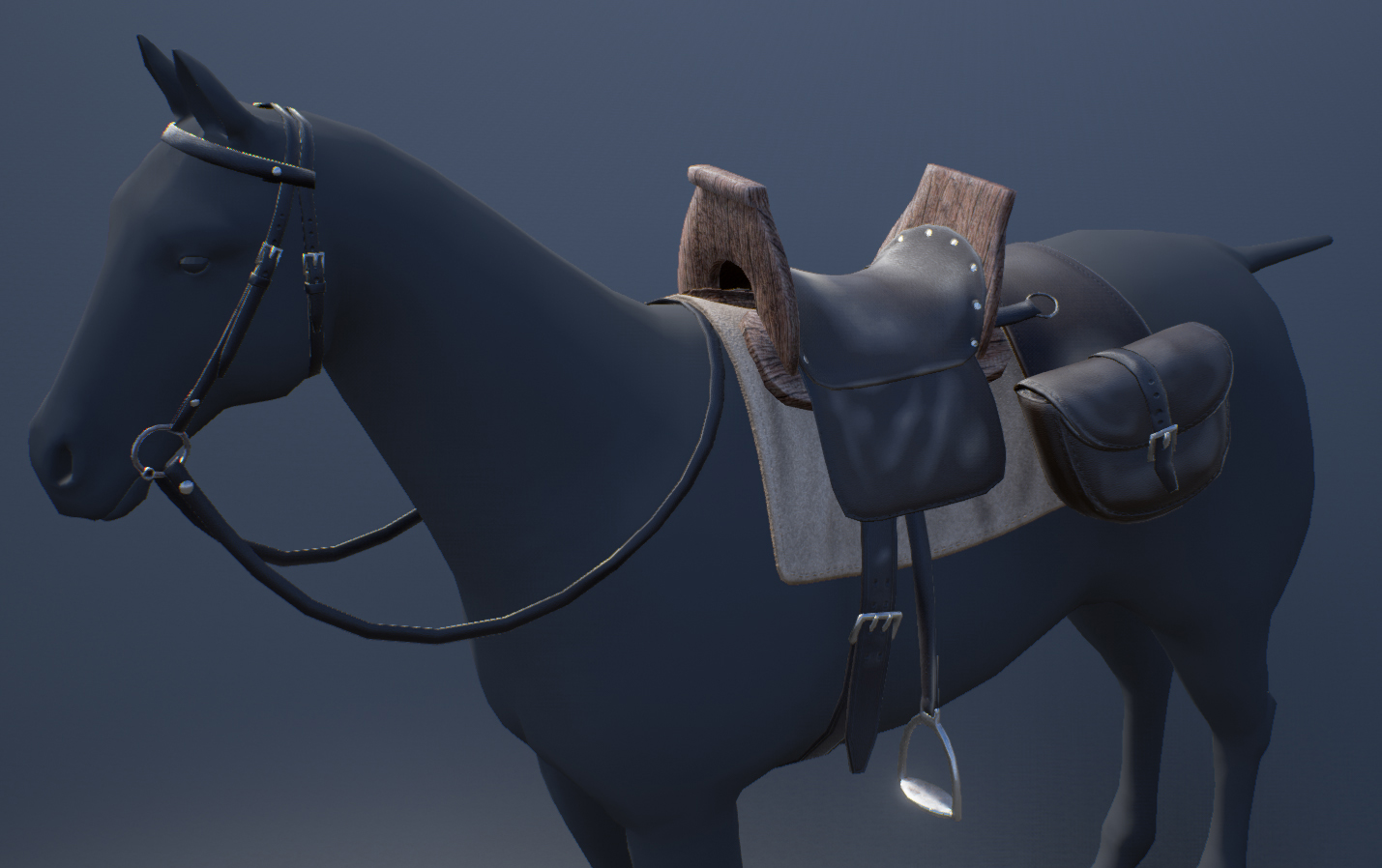 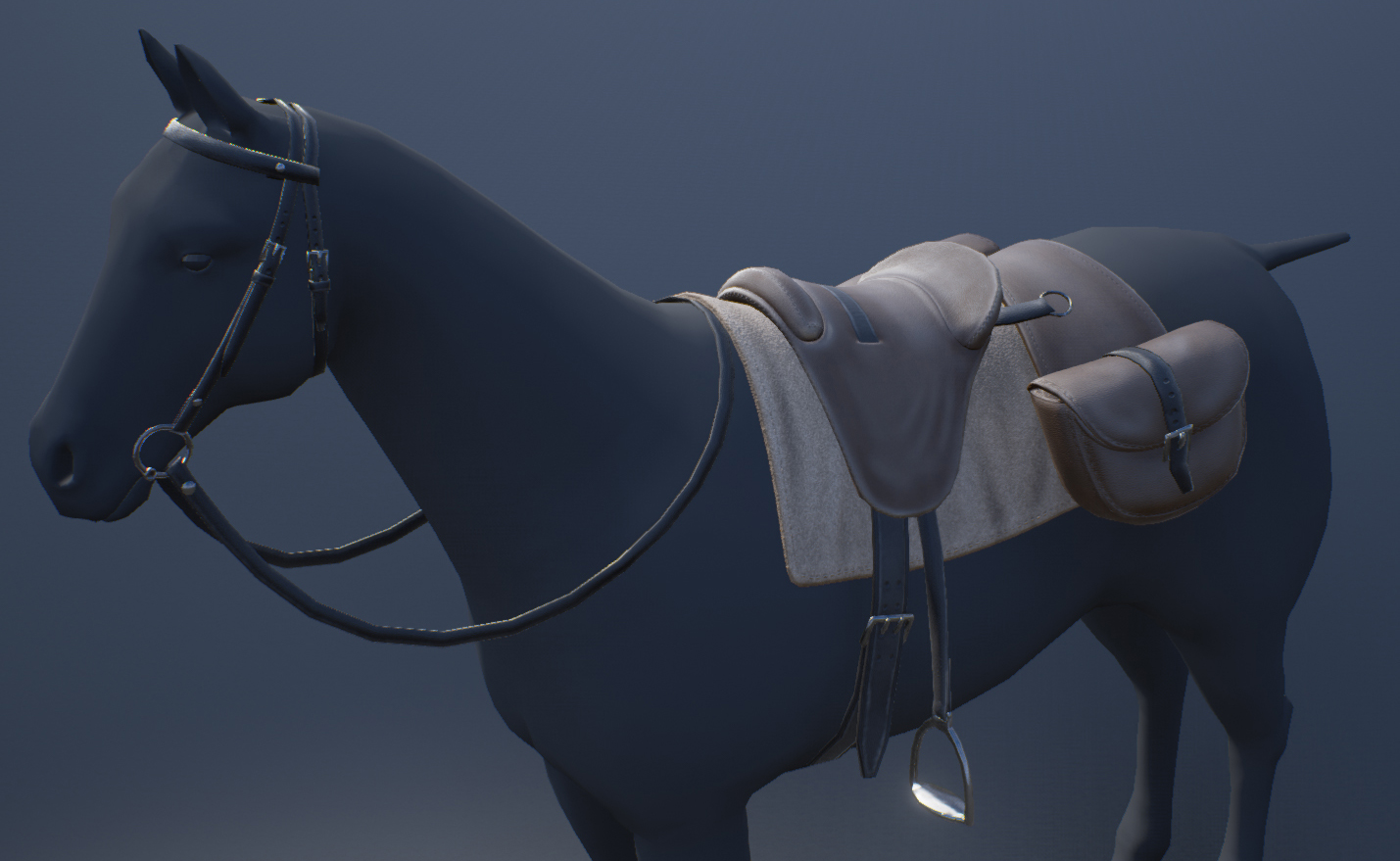 Look at these fine, Neran saddles

The Society has also been tasked with improving the other creatures, including the Dryas Elk, Ursaphant, Canis Rabbit, and Flower-Cup Porcupine. You saw some of the new animations and fur a couple updates ago and we have been continuing along that vein. The Prologue will have wild animals that players can encounter so developing a few different archetypes will help to flesh out the animation rigs and animal behavior that we will include.

Moving around in Elyria needs to feel right and look great, so this party is adding support for dynamic jumping, because we have dynamic bodies! Most games with different races have a standard jump height and length no matter if you are a tiny Gnome or a massive Troll. While that makes level design and animating a lot easier, it doesn't provide the kind of dramatic realism that Chronicles of Elyria aspires to. A Kypiq and a Yoru will not be able to jump the same height, nor will a fit person versus an overweight person. Because of this variance, we need to create the systems and animations that will deliver a jumping experience that can support all the Tribes and all fitness levels.

In addition, they've been improving the blending, movement speeds, and inverse kinematics that will provide the necessary connection between the character and the world to make it feel "real".

An epic undertaking without glory, this daring group has been tasked with improving our asset management, pipeline, and organization. Many of our 3D assets were organized by the tech demos we made last year but the lion's share had not been brought into a sustainable system that will allow assets to be worked with easily throughout the rest of production. Although their work won't provide any tangible results to the world, it will allow our team to manage every tree, bush, building, hairstyle, piece of equipment, tribe, and more quickly and easily. In turn, that will allow them and the rest of the team to work with those pieces to build out the game with greater ease and alacrity.

These brave souls are creating concept art and dossiers for each of the twelve Tribes. This has actually been in the works for a while, but I've been mum about it since we hadn't nailed down the names and some of the technical details surrounding animation and character customization. We announced the names in a previous update and are getting close to writing up a Design Journal about the Tribes of Mann. It doesn't seem like a big tease anymore to tell you that it's coming soon, since we've vowed to make Tribes the topic of the next Q&A. Caspian will post a Design Journal on Tribes before the Q&A so folks are able to ask informed questions.

Order of the Online Play

Going online with SpatialOS - this sounds like a no-brainer, but these madcap explorers recently got parts of our game up and running on SpatialOS. It may seem counter intuitive that we haven't been putting a lot of development into the 'O' part of MMO, but SpatialOS makes it one of the least risky technology problems we need to solve for the game! Still, two-out-of-three of our Pre-Alpha Experiences will be online (ElyriaMUD and Kingdoms of Elyria) so the time has come to fire up those servers and start herding packets. So far, it's a blank level where the team can run around with each other, but it's the first brick in the foundation of online gameplay and we're thrilled!

Protectors of the Web

Recent website improvements this group has made include an historic Featured Posts listing, locating #49 on the Influence chart (#50 is still at large), adding additional moderation controls, creating a place to know what your current package is, fixing some issues with Kickstarter binding, and slaying a couple minor bugs here and there. Still on the horizon is an updated breakdown of the forums by topic, and an inventory system that will completely resolve the question of "What do I own?" and pave the way for merging and gifting.

This group is also responsible for all the Anniversary promotions we are running, which means adding sale prices, new items, token pledging functionality, and more. This team is pretty darn busy this month!

On top of that, the UIUX for V3 is underway, with Death working tirelessly on the wireframes for the updated experiences and defining the feature improvements we will be adding (such as chat!). This party will be together for longer than the other parties since they are tasked with bringing V3 to fruition after designing it. Kind of like having to take the One Ring first to the Elves in Rivendell and then having to go all the way to Mordor after that!

Most of these adventures are mid-encounter, so there isn't much to show...yet! They couldn't stop me from capturing some video around New Haven though! It sports some of that updated locomotion (even from the Silver Run Mine video) which includes pivot-in-place technology and better "weight" while moving; no more sliding. You can also see a nice, up-close shot of the New Haven Keep which people really wanted to see in the Titan's Steppe Tour video from a bit ago.

There is some audio in this as well

Soulbound Studios continues to grow, slowly but surely. This time, we welcome a new friend for the community! Adam Vener joins us as a Community Support Lead and we are excited about what he will bring to this already positive community! But don't take my word for it, here is Adam in his own words:

Greetings and salutations to all!

My given name is Adam Vener, but I've been known by the handle "Serpentius" (Serp to my friends) for almost 2 decades now. Having grown up around games like Pong, Space Invaders, and Zaxxon, I quickly became obsessed with technology. After reading every Dragonlance novel I could get my hands on, I fell in love with fantasy as a young teenager. With a huge imagination, I quickly I found myself as the Dungeon Master of AD&D games with my friends.

Being a geek, I am inspired by the possibilities of blending technology and imagination into a great experience. I have played many an adventure myself, starting with the Infocom text-only series through King's quest and Ultima. Like many of you, I have been a gamer and nerd all my life. I always wondered if I'd see true synergy between an online game and the endless imaginative possibilities that D&D gave me when I was younger. Then one day I learned about CoE and Soulbound. I read and continued to read and couldn't get enough. I knew straightaway that even if I didn't end up being a part of the team bringing this grand project to life, I'd be a fan and player for years to come.

In my professional career, I've managed some of the largest forums and communities in gaming. I ran my own game server company for a while when I founded our industry's first online admin service at HomeLAN in 1999. I am a California native, but live in Washington now and love the rain!

I have 4 wonderful grown kids, so I've been busy since I can remember and I wouldn't have it any other way. When I am not working, or playing, I am baking, reading or helping others with their tech nightmares.

My spirit animal is the Dragon, and I hope I get a chance to show all of you an amazing drawing of 2 of these magnificent creatures in battle that I picked up in 1986 at the Orange County (CA) fair.

I am seriously humbled, overjoyed and honored to co-represent the leadership of this incredible community in what will surely be the ride of our lives. I look forward to partnering and getting to know all of you on this exciting journey!

To help you get to know me a little, I’ll leave you with one of my favorite quotes: "The needs of the many outweigh the needs of the few, or the one" - Spock ST2

Last May we launched our Kickstarter campaign and invited you all to share this journey with us. A year later, we have quadrupled our staff and are making the most of the funds that we were entrusted with. To show our appreciation, we are running a series of promotions in May that you've probably already read about but, if not, check out the announcement post and learn about what's happening this month!

That's it for this update, but there will be more posts than usual this month during the promotion that should make May one of the most exciting months yet!